Get Me to the Funny: Chortle Portal 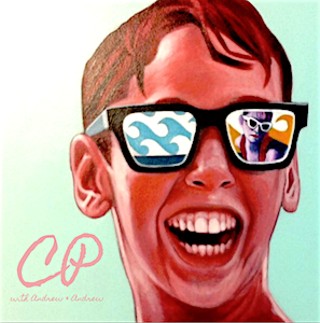 What’s the best way to get to a hip and cool stand­up comedy night? Taxi? Bicycle? How about a Chortle Portal? That’s the name of the weekly show produced by current UT students and comedy gurus Andrew Clarkston, Andrew Dismukes, and Shannon Cloud.

The entrance to Chortle Portal is in the back of the Taos Co­-op on 27th & Guadalupe, across the building’s parking lot. There, I met with Mr. Clarkston and Ms. Cloud before the event to discuss how they run the thing. (Mr. Dismukes was away for the night, hosting at some place called Cap City Comedy Club.)

The two told me their weekly comedy nights started, like most great endeavors, as an idea. Their freshman year at UT, the three students met through their involvement in TSTV, UT’s student-­run television station. The Andrews wanted to not only create comedy, but to produce their own showcase and do their own thing, while being able to contribute to the Austin comedy community at the same time. They brought the idea up to Cloud and, in their sophomore year, officially asked her to help. A month later, they hit the ground running.

[SIDEBAR: Clarkston tells me that during the summer of Chortle Portal’s first year, he, Dismukes, and Martin Urbano went on tour across Texas for two weeks while they were between leases and crashing on friendly couches in different cities. They called it the Gross Lonely Boys Tour. In San Angelo, the boys were supposed to perform at a karaoke bar, but the bar’s patrons were’t having it. The comics tried a set or two, but could tell the crowd obviously wanted karaoke, so they backed off for a few hours and ended up doing the rest of their sets at night’s end. “It was awful,” recalls Clarkston.]

Now Chortle Portal is finishing its first year – and still going strong, running every Saturday at 7pm. I enter the portal down the stairs to Taos Co­-op’s basement. The venue’s small and dark, with chairs facing a makeshift stage. It’s packed tonight, with around 50 people, most of them students – something Cloud is proud of. “It being a younger scene near UT [provides] an opportunity for people our age to watch it,” she says. “It feels like you’ll go to a showcase and it’s not a lot of students that are there. We’re trying to hopefully give an opportunity for people to see comedy that wouldn’t necessarily see it, because it’s more convenient.”

“It’s the youngest crowd you can do in town,” agrees Clarkston.

Danny Goodwin is filling in for Andrew Dismukes this evening, and takes the stage with Clarkston after Nick Saverino's warmed up the crowd. They start off with random impressions and riffs, then quickly throw it to the first act, Devon Walker, who is calm but confident. After him is the awkwardly charismatic Michael Malamud. JT Kelley follows with an off-the­-wall personality, and then it’s time for the two closers: Martha Kelly and Pat Dean.

Dean’s a local favorite. Kelly might be someone you recognize but can’t quite place where from. She mentions in her set that she’s moved between Austin and Los Angeles four times, so you might have seen her around. Or maybe you’ve seen her on Zach Galifianakis’ new FX show, Baskets.

I catch up with Kelly after the show. She tells me that she hasn’t done comedy in L.A. since about 2008, but that, when the Upright Citizens Brigade Theatre opened, it created a central place for the community to come together for stand­up, sketch, and improv shows. “They had a couple of weekly stand­up shows that would get great crowds,” Kelly recounts. They’d also give passes to their regular comics, so she was able to see the likes of Louis C.K., Paul F. Tompkins, Maria Bamford, Sarah Silverman, and others for free.

“I wasn’t making friends in the circle of the successful people,” she jests. “Because I started out there, and – kind of like the way it is here, now – if you show up all the time, and you perform, and you’re not mean to people, you just end up being friends.” She met a lot of comics that way, though she was like any other audience member when it came to the more famous ones.

Kelly met Zach Galifianakis in 1998 when she first started doing stand­up. They kept in touch over phone and text, but after a few years of not really seeing each other, he called her to ask if she’d be on a show he was creating. She tells me nothing but nice things about the guy, like how he didn’t act like he was doing her a favor by having her on his show, or how he just wanted to work with other nice people. She had a great time over the two months it took to shoot the first season, and is excited to get back to work on the already-picked-up second season.

By now a veteran at stand­up, Kelly’s had her fair share of showcases and sets in different cities. But she leaves me with some favorable words: “The comedy scene in Austin is amazing, and is really the best of any scene I’ve ever been in. Any time I’m here it’s definitely great.”

Note: The Chortle Portal First Anniversary (Sat., March 26, 7pm at Royal House on MLK & Pearl) will be like the usual crowd-pleasing show combined with a party and performances from longtime Chortle Portal favorites. A bigger summer tour is planned this year, toward reaching one of the most historic cities in American stand­up comedy: Chicago.