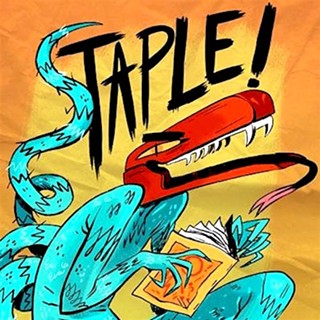 It’s the dozenth year for this local expo of comics-focused indie media and geekish party action that’s, as ever, wrangled by the sideburned provocateur they call Uncle Staple. And, yes, this year’s Staple! is loaded with enough diverse goodness to vibrate your molecules beyond the mundane world’s usual walls of ennui.

Note that the “sideburned provocateur” we mentioned? When he’s not called Uncle Staple, he’s known as Chris Nicholas – we’ve been following his industrious trajectory from the beginning – and he’s pretty stoked about Staple! 2016.

But then, he would be stoked, right? Especially when talking to the press, your event producer, your person-in-charge, they’re probably not gonna be like, “I don’t know, man, I think maybe the whole thing’s gonna be pretty fucking lame and boring this year, you know?”

So we’ll just leave off the superlatives when telling you what Uncle Staple told us. We’ll leave off the Lovecraftian parade of adjectives – adjectives like the Nicholas-favored “brilliant” and “awesome” and “totally amazeballs” instead of the more typical HPL “stygian” and “eldritch” and “non-euclidean” – and merely provide the basics of a few highlights.

These conventions always have featured guests, of course. Now, when you’re something big and stoopid like, say, Wizard World or whatever, you get what? You get, like, Mike Tyson and a bunch of Wrestlemania dudes. You get that woman who appeared as a scantily clad alien prostitute in one episode of some sci-fi show that was canceled after two seasons back in the late ’80s.

At Chris Nicholas’ latest celebration of indie media, they’ve got Gene Ha – the man who, among so many other things, did the art for Alan Moore’s Top 10 and has his newest work, Mae, coming out from Dark Horse later this year. They’ve got Benjamin Marra, the comics creator whose recent Terror Assaulter: O.M.W.O.T. has been largely responsible for the rising tide of depraved, violence-riddled, porn-warped glee in the world. They’ve got C. Spike Trotman, the one-woman powerhouse who complicates the Internet with her Templar, Arizona webcomic and runs Iron Circus Comics, Chicago’s biggest comics publisher. They’ve got Sophie Goldstein, whose The Oven, published by AdHouse Books, is a double Ignatz winner. They’ve got – well, they’ve got even more guests than just those, of course.

And, in addition to the rows and rows of booths featuring indie artists and publishers and makers hawking their various zines and books and posters and figurines and other geektastic wares in the two main rooms, there will be creative opportunities (live drawing lessons from “Commander Mark” Kistler! a zinemaking workshop with Inés Estrada!) and panels (on webcomics! on diversity! on crowdfunding with Patreon!) and performances (a drawn-while-you-watch art show! live readings from comics!) and … oh, a whole lotta things going on during the Saturday and Sunday (March 5 & 6) that Staple! 2016 takes over The Marchesa, there in what used to be called Lincoln Village but has lately been rebranded as The Linc.

[Picture it: That entire archipelago of retail venues and event spaces and eateries, the whole scattered strip mall rising as a single body, turning a giant folding chair around backward before sitting in it & looking at you with a much-rehearsed Casual Smile & saying, “Hi, I’m The Linc. Let’s rap.”]

We’re figuring you’d like to know about this, in case you’re into comics culture.

In case you enjoy sequential art or independent media or the whole pop-cult fandom scene or even just the sci-fi superhero sort of things that embiggen Hollywood ROIs these days.

In case you want to do something public and fun before the vast juggernaut of entertainment called SXSW descends upon our fair city once again and it’s time to hide in your cave and guard the Precious.