Who says sex is no laughing matter? 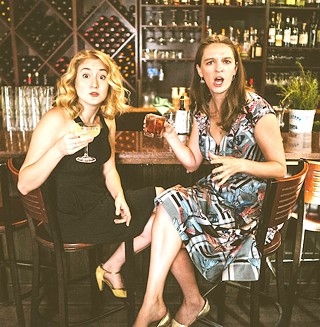 On the other hand, if you’re considering the effects of sexual pleasure within a context of humor, then this showcase from comedians Ella Gale and Katie Stone is what you want to be checking out real soon.

Gale and Stone are the co-hosts of Naughty Bits, a stand-up show where the ladies give a curated gang of comedians sex advice based on their jokes.

Gale and Stone have been running this monthly gig at The New Movement’s basement-level lair Downtown for a while now, and the stand-ups they feature are always at least pretty damned good. But now they’ve got a special edition of the show coming up – because Valentine’s Day, right? – and, holy shit, it’s like some Austin MVP array of talent performing and being sex-advised for your entertainment and edification.

Not that Gale (who came from out of nowhere, it seemed like, to knock last year’s FPIA contest upside the head with her goofy, geeky humor) and Stone (who’s currently got a one-woman show called Strong Female Lead rocking the New Movement boards) aren’t already funny enough by themselves. Because they are, they totally are. But, as you can see in the interview that follows, what they’re doing with Naughty Bits isn’t all just fun and games …

W. A. Brenner: Lemme see if I've got this right. You guys host a show where the featured stand-ups take the stage, do a short set, and then … you give them sex advice based on the jokes they tell?

Katie Stone: Yes, the emphasis is definitely still on the stand-ups’ jokes, but we have them come sit with us and talk about the events that inspired them in a real way.

Ella Gale: We also give each other advice – which Katie rarely needs, because she is a boss – and we do topical jokes on sex news. Talking to comics about sex is definitely the highlight.

Brenner: Where’d the idea for this show come from?

Stone: We wanted to host a show together that played on our strengths as a duo, and the concept and name were both Ella’s ideas.

Gale: I kept hearing comedians tell jokes that made me want to give them sex advice. And then I said that out loud, and Katie made a show happen.

Brenner: What is it about a comic's performance that evokes the sort of advice you think the comic needs? I mean, the show sounds like it's primed for hilarity, regardless ~ but are y'all just going with whatever's funniest, or are there certain stand-up tropes or styles that suggest actual, uh, deficiencies-of-fucking that should be addressed?

Stone: Hah, that’s a very good question. Usually we just take information from content. More times than not, the "advice" portion is just a conversation, and my absolute favorite interviews have resulted in the comic giving us better advice than we could give them. Last year, the comedy community suffered a great loss when our friend Montgomery Wayne passed away. Monty had been caring for his wife for years after a debilitating crash, but still loved her so, so much even after over 20 years of marriage. Having him on the show to talk to us about how he lived with that love was one of my favorite memories the show has provided me.

Gale: Stand-up can be pretty sex-obsessed, but it can also lean sex-negative. A lot of comics draw humor from the idea of their bodies or sex itself being bad or gross, and I try to call that out whenever possible. I think a lot of comics have jokes where the premise is "My partner wants this crazy thing!" Or "I want this crazy thing!" I try to encourage people not to feel ashamed of what they want. Not everything is realizable, but a lot of things are, and shame helps no one.

Brenner: How do you choose the comics featured, and have you ever featured a comic that either – or, hell, both – of you have slept with?

Stone: We both attend many comedy shows and open mics every week, and we invite our favorite comics on who we’ve seen be really funny lately. We love having a mix of both established and great new comics on the show, and try to get a mix of perspectives – gay, straight, male, female, et cetera.

Gale: Talking with people who do personal jokes is really fun. But we’ve had comedians on who don’t tell any "real" jokes about their partners. When you tell a sex joke, you make yourself vulnerable, and when you tell a sex joke about your partner, you make them vulnerable. Comics walk that line in different ways, and that’s an interesting choice to talk about as well.

Stone: My last boyfriend is a talented comedian and did come do Naughty Bits while we were dating. One of the funnest parts of doing this show is that the local comedy scene is such a strong community, so while the advice we give is 100% based on jokes and thus accessible to the audience, there’s often a behind-the-scenes camaraderie informing the interview for us – that time the audience just got to be in on the joke. We’ve never had a comic on who we’ve both slept with, because we have a truly blessed friendship made of angel dust and seldom even find the same men attractive. It’s really special.

Gale: Katie was jealous one time when I went out with a circus performer, but that’s not a bridge we have to cross very often.

Brenner: Is Naughty Bits exclusive to The New Movement or do you sometimes do the show elsewhere?

Gale: We did the show at Hell Yes Fest last October. It was scary and exciting, because it was the first time we had to interview people we’d never met about very personal issues. But it was great! We met very funny comics from all over the place who were all fun to talk to in different ways. That was a big confidence booster. We just did a tour in Dallas, Oklahoma City, and Tulsa, again with comics we’d mostly never met in person.

Brenner: I hear that this upcoming edition of Naughty Bits is kind of, ah, putting on the ritz for Valentine’s Day?

Stone: We definitely have a few special surprises in store for the February 12th show, and are partnering with Forbidden Fruit to have some fun giveaways and demonstrations. Great local artist Danny Jock is gonna be helping us out with some original Valentine's cards to give our audience. But the number one thing we've done to make it stellar is put together a great line-up. Mac Blake is a former Funniest Person in Austin winner and has an album out with Sure Thing Records. Maggie Maye has all sorts of national buzz and was just on Conan. Sara June is extremely talented and will have just gotten back from performing at San Francisco Sketch Fest. Seriously, this show is representative of what’s really great in Austin comedy.