Permit issue leads FronteraFest to shut down part of festival

For the first time in its 23-year history, FronteraFest has canceled an entire portion of the festival. Late Wednesday, Jan. 20, a joint statement from fest co-producers Christina J. Moore of ScriptWorks and Ken Webster of Hyde Park Theatre announced that the 2016 Long Fringe, scheduled for Jan. 18-31, was not going forward.

The release attributed the decision to "an unfortunate and unexpected permitting issue" at the host site for the Long Fringe, Ground Floor Theatre. As that theatre's director, Lisa Scheps, describes the situation, a city inspection of the warehouse redevelopment at 979 Springdale of which Ground Floor is a part led to the discovery that the theatre hadn't been issued a certificate of occupancy before it opened last year and hadn't received one since. Until the facility could receive an official inspection and that certificate obtained, Ground Floor could not remain in operation. This took place late last week, and progress was complicated by the three-day weekend for Martin Luther King Jr. Day. As of Tuesday, it was clear the matter could not be resolved in time for the 11 Long Fringe productions to have most of their performances, so the decision was made to cancel.

Scheps says she was "devastated" at leaving those 11 productions and companies with no place to play. As a way to compensate them, Ground Floor has canceled its plan to mount a production of its own in April and offered all the companies with Long Fringe shows the option of presenting them there then at no charge. "We understand that is a very small gesture, but it is the best we can do," she says.

Scheps says that Moore and Webster have been very gracious about the unfortunate situation, and all have made a point of apologizing to patrons and festival participants. The FronteraFest producers have also made assurances that anyone who had already purchased tickets for a Long Fringe production will be issued full refunds.

The 11th-hour cancellation made finding another performance space for the Long Fringe participants difficult but not impossible. As of press time, six of the Long Fringe shows have secured alternative venues and will be going forward with performances over the next 10 days, although one of them, And Still the Dead One Lay Moaning, is no longer part of FronteraFest, so you won't see it on the Hyde Park Theatre website and can't purchase tickets for it through FronteraFest. They are:

The FronteraFest producers are continuing to keep track of Long Fringe productions that are going forward and will list them under the BYOV (Bring Your Own Venue) heading on the Hyde Park Theatre website.

Anyone seeking additional information from FronteraFest is encouraged to contact Christi Moore at christi@scriptworks.org. For more info about Ground Floor Theatre, contact Lisa Scheps at lisa@groundfloortheatre.org. 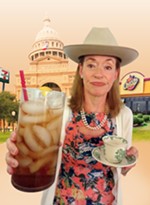