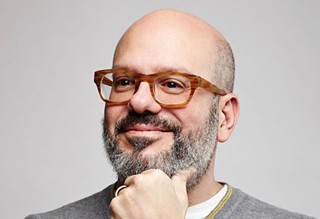 This week, the Austin-based laughapalooza released a second wave of comedians heading to Austin April 20-23 for the fifth fest.

Cross, the Arrested Development alumnus and creator-star of The Increasingly Poor Decisions of Todd Margaret who recently reunited with Mr. Show partner Bob Odenkirk for the Netflix sketch series With Bob and David, is set to take over the Paramount Theatre stage Thu., April 21, at 9:30pm.

Jones and Jost will also play the Paramount, headlining on on Fri., April 22 with a show they've dubbed Leslie Loves Colin. No word yet on just what it is about the Weekend Update co-anchor that Jones loves, but given the comedic chops on this current SNL-featured cast member and future Ghostbuster (she's in the Paul Feig reboot with Melissa McCarthy, Kristen Wiig, and Kate McKinnon), she'll express it in a way that will put you in the aisles.

If you're not a fan of Carr's from one of the many quiz shows he's hosted on UK TV – say, Your Face or Mine?, 8 Out of 10 Cats, or The Big Fat Quiz of the Year – you can find out why he's such a catch for Moontower by catching his stand-up special Jimmy Carr – Funny Business on Netflix, starting April 1. Then you can see him live April 22 at Stateside at the Paramount.

And speaking of Netflix, now that Garofalo has that pesky prequel to Wet Hot American Summer in her rearview, the 2013 Moontower headliner is clear to come back to the fest.

Also added to the Moontower 5 roster:
• Fahim Anwar (MTV2’s Guy Code);
* Jackie Kashian (The Dork Forest podcast);
• Mark Normand (Inside Amy Schumer);
• Jeremiah Watkins (The Goddamn Comedy Jam);
• Ari Shaffir's This Is Not Happening, with longform stories by comics;
• Ian Abramson's Seven Minutes In Purgatory, which subjects comedians to performing stand-up alone while wearing soundproof headphones but which the audience gets to watch from a live video feed; and
• Brendon Walsh and Randy Liedtke's podcast, The Bone Zone.

For the full rundown on who's coming to the 2016 Moontower, visit www.moontowercomedyfestival.com. A limited number of Moontower badges are available now at a special early bird rate: FAN badge, $99; ACE badge, $319; VIP badge, $599.