Review: The Book of Mormon 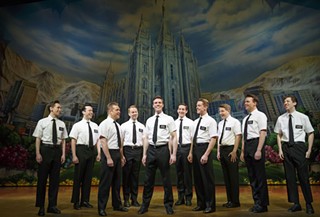 Events are scary these days. Offend the wrong person or group, and violence is a very real possibility. At the least, you might find yourself targeted on social media and get your livelihood doxxed out of existence. On the other hand, sometimes it’s nice to offend everybody. I mean, everybody! Race, religion, gender, take your pick.

Just disrespect the entire human population. Tell some nasty jokes at our expense. We’ve earned it.

Enter Trey Parker, Robert Lopez, and Matt Stone, the authors of The Book of Mormon. They are the court jesters of our time, saying what perhaps nobody else can. Their highly un-sacred musical about a pair of Mormon missionaries sent to Uganda to make converts comes as a surprising relief in an era of bitter conflicts over microaggressions, safe spaces, and the damage that language can cause. The musical is grandly unapologetic, and it feels great. Perhaps that’s why the Church of Jesus Christ of Latter-day Saints (aka the Mormon Church) has in fact embraced the musical, buying three full-page ads in the program.

The Book of Mormon follows Elders Price and Cunningham, two newly minted Mormon missionaries, on their way to Uganda. Elder Price (Billy Harrigan Tighe in this national touring production), having been the star pupil during missionary training, had been hoping that he might be sent to Orlando, land of bright colors and amusement parks. Not only does he find himself going to Africa, he also finds himself paired with Elder Cunningham (A. J. Holmes), the painfully awkward and clingy guy who never gets anything right when he attempts to spread the word. Off they go to a small village, where warlords compete with venereal disease to see who can claim the most victims, and the locals are less than impressed – at first – with the Elders’ message. Then, Elder Cunningham meets the town beauty, Nabulungi (Alexandra Ncube), who thinks that Salt Lake City sounds like a pretty nice improvement over their limited village life.

As a piece of theatre, The Book of Mormon isn’t so groundbreaking. It follows a familiar narrative arc and draws on a number of standard musical theatre tropes. In fact, the musical could stand to shave 15 or 20 minutes from the second act. Where the show succeeds is in bringing Parker and Stone’s South Park sensibility to the stage, where it joins vulgar humor with high production values to make its point: that maybe belief in literal truths isn’t as important as creating a positive community. And if that means telling people some crazy stories about a guy and some golden plates he found in his backyard in the 1800s, so be it.

The cast of this touring production is delightful, in particular the leads. Casey Nicholaw’s choreography is great fun, as are the costumes from Anne Roth. It’s funny to use the word “polished” to describe a musical that spends so much time talking and singing about shit, but The Book of Mormon is very polished indeed.

The characters eventually come to the conclusion that the details of one great, big, silly story don’t matter anywhere near as much as the people who tell it. In an age of extremism and bitter close-mindedness, the authors’ willingness to deliver a message like that in a way that holds nothing sacred is a welcome treat.

Review: The Book of Mormon
Outlandish, unlikely musical hit might make you a believer