In the Bounce House with Comedian Danny Palumbo

2015’s Funniest Person in Austin is cooking on all burners 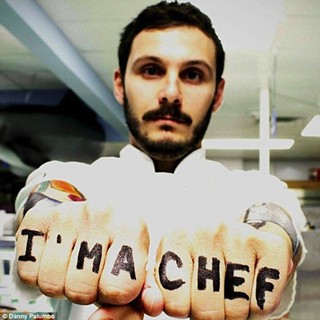 That’s right, “cooking on all burners.”

Because Danny Palumbo, winner of this year’s Funniest Person in Austin contest at Cap City Comedy Club back in May, is also a chef.

“Okay, I was a sous chef at one place, years ago,” says Palumbo. “They actually hired me to do that. But I did that for five months and I was like, ‘Nah, this is too much.’ Trying to do that and comedy, the hours were too crazy.”

So this Palumbo’s a line cook. But he thinks like a chef, I’ll insist, at least as far as having his metaphorical finger on the pulse of the culinary industry, of foodie culture. How else would he come up with the satirical (the totally hilarious) websites lil’ buco and Abbrev’s?

But we’re not really talking about food here, are we? Food, in this reporting-on-comedy situation, is just a matter of The Ol’ Day Job – partly because I interviewed Palumbo while chowing down on some tasty catfish, while the comic was tending bar at his steady Quality Seafood gig.

So never mind justifying this article's kicker – what’s it been like, Danny, reigning as this year’s Funniest Person In Austin?

“It’s been great,” says the comic, wiping at the countertop with a damp rag. “Locally, I’ve been so busy, I’ve done a ton of shows. Cap City’s been very good to me – I’m there Monday through Sunday next week, featuring for three different headliners. And outside of that, there’s been attention from agencies – one place out in Los Angeles, too. So hopefully I’m gonna do the same thing [Cody] Hustak did – which is, stay for a year and then head out. That’s the plan right now.”

And do you have some kind of complex agenda set up until then?

Palumbo laughs. “I don’t know if it’s complex or not, but what I’m working on now is a lot of writing. I wanna get a show pilot in the can, a lot of sketches, so I’ll have, like, a reel I can show people. I already have a couple things on YouTube, and there’s more stuff planned. And that’s kind of the intention with Bounce House, too, that I’m writing and filming sketches for each show.”

[Note: Bounce House. That’s the new name of the comedy showcase, formerly called Jazz Cigarette, that Palumbo and Aaron Brooks host at Spider House Ballroom on the second and fourth Monday of every month.]

So – sketches for filming, and co-hosting Bounce House, and you run that weekly showcase at ColdTowne, and you’re also working on a third foodie-mocking website to form a sort of trilogy with Abbrev’s and lil' buco?

“I’m trying to work on it,” says Palumbo, “but it’s hard. My brother’s a chef, he’s got a general manager position at a country club, and normally we’d hang around and talk ideas and stuff. But he’s back in Pennsylvania, and I haven’t been back in a while. But the idea for the third one, we’re gonna tackle Fusion. You know? That whole co-opting-other-people’s-culture, that sort of thing.”

[Note: Palumbo’s the writer and designer of the project, but – he makes sure to mention – it was Ramin Nazer (the FPIA of 2012, no less) who built the actual websites.]

All of which sounds pretty busy. I mean, just filming sketches takes a lot of time and effort.

“I’m kind of going on tour with Mac Blake and Aaron Brooks, too,” says Palumbo. “We’re going to New Orleans and Atlanta in the springtime. We recently went to Denver together and had so much fun!”

[Note: The exclamation point at the end of that last remark really needs to be there. Palumbo, though he could probably nail a movie role as some carefully blasé hipster, is not at all poker-faced when talking about what he likes, is not someone who walks around like, you know, Man Overbored.]

A brother back in Pennsylvania. And that’s … where Palumbo’s from?

“I grew up an hour north of Pittsburgh,” he tells me. “And when I started doing comedy, I moved to the city to do it. Did that for two years, just seeing how comedy worked. Had kitchen jobs in the day, doing comedy at night. And Austin’s reputation brought me here.”

Austin’s reputation, yeah. It’s always brought in the creative types, and now it’s bringing in more creative types – and a whole steaming shitstream of real-estate developers and various other species of wannabe profiteers.

But, ah, let’s not get distracted by the current urban situation’s bete noir, shall we? Even as much as this article's structure is attempting to emulate the action of an actual bounce house.

What were you saying, Danny? About moving here?

“I moved here not knowing anybody,” says Palumbo, setting up beers for some new customers, busing away a couple of plates, checking the level of the under-counter ice bins. “But a friend of mine, John Evans, had a good friend here: Seth Cockfield. And I came to visit, and Seth was so awesome about showing me around town. And I bombed on my first night here at ColdTowne – it was the worst set I had. But I was still, like, ‘Man, I like it here.’ I remember I was at Cherrywood Coffeehouse the next day, and it was windy, and I was outside, and a tree branch fell on my head – knocked me down to one knee. And I was like, ‘Maybe I shouldn’t move here.’ But I ended up having a couple of good sets. Everyone was super intimidating, because the comics here are so funny and original. I saw Cody Hustak and Ryan Cownie do their thing, and I was like, ‘I’ve been doing straight stand-up, but – you can do that stuff?’ So it was kind of intimidating, but I started realizing, wow, these are the best audiences I’ve ever performed for. They’re willing to sit through complicated jokes, long premises – they’ll keep up with you. And from there I really entrenched myself in the community, just came out to see comics every night, getting to know everybody. And I’ve just lived and breathed comedy for so long here, now.”

Who you can see doing his hosting-and-sketch thing with Aaron Brooks at Bounce House Monday, Nov. 23.