This is what it's like when you're a man, a husband, a father, an artist. 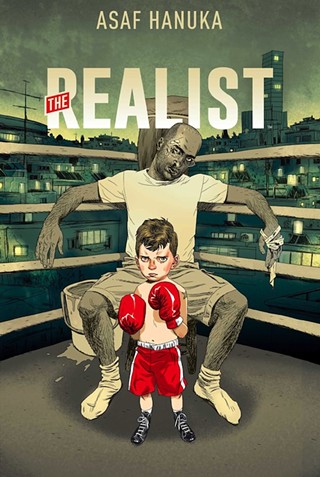 It's been a long week, and now you deserve to have one day when you can curl up with a good book – let's call it Lit-urday. How about something that's got visuals even more striking than the powerful textual and subtextual parts of its compelling whole?

How about something autobiographical by one of illustration's quirky forces of nature?

Ladies and gentlemen, The Realist by Asaf Hanuka.

[Note: We raised a huzzah earlier this year, about the wartime thrills and horrors this Hanuka and his brother Tomer purveyed via the magical-realism of their The Divine, released by First Second Books.]

It's Asaf's personal life and times on intimate display in this English-language collection of full-color strips from the artist's ongoing series, originally published in the Israeli newspaper Calcalist, now in solid and beautifully designed hardcover from the geektastic mavens of sequential art at Archaia.

I'd churn out a few more words of my own to describe it, but, except for one quibble, the volume's own back-cover blurb is spot-on:

Internationally acclaimed Israeli cartoonist Asaf Hanuka's weekly strips unfold an emotional autobiography full of humor and melancholy, wild imagination, and quiet desperation. With echoes of R. Crumb and Daniel Clowes, Hanuka moves readers with his depictions of everyday life, commenting on everything from marriage to technology to social activism through intimate moments of triumph and failure ...

The quibble – aside from our correcting the lack of a serial comma, thank you very much – is that those "echoes," while not poorly attributed in the blurb, are, to our mind, not so much Crumbish or Clowesian as they are redolent of Eddie Campbell's autobiographical work. (Particularly his Alec: The Years Have Pants, from Top Shelf.) They have the same underlying feel, the same sort of surrealist-tinted, yes, humor and melancholy informing Hanuka's parade of quotidian yet compelling life.

But then, maybe the blurb was invoking the sheer drawing skill, the panoply of colors, that Hanuka brings to bear? Because then, yeah, okay: Point taken.

Because, at least as much as it's the case with Crumb and Clowes, you could be illiterate and still revel in the visual artistry this many-talented man creates. And, moreso than with anyone working in comics – except maybe, oh, James Jean? – a person could remove the texts and the outlines and just sit, transfixed as ever, by Hanuka's impeccably balanced and stunningly diverse color palette.

[Not to get too inside-baseball about comics in the general-interest pages of your Austin Chronicle, right? Although, won't most readers have followed a link to this review because they're interested in comics to begin with? Ah, the modern, fragmented world!]

In any case, yes: The Realist is an object worth owning, because the author's life will likely resonate with your own on many levels, because it's fascinating to witness even when it doesn't, because it's a bona fide work of art – so many different works of art – in bookform.