The Dark Prince hosts again, promises one hell of a time 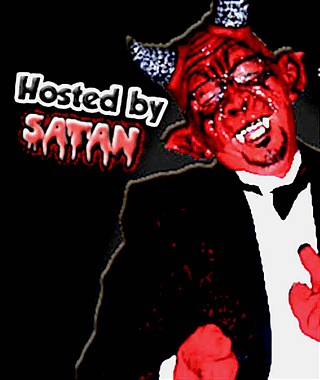 Dead celebrities will be resurrected for the sixth year in a row during this night of diabolical shenanigans. Elvis? Yes! Nixon? Yes! Chaplin? Yes! Abe Vigoda?

No. Because, listen: Abe Vigoda's not dead yet.

So, no, no Abe Vigoda. Tsk. But damned if that Katie Pengra and Norman Wilkerson aren't bringing a Halloween-ready show fit to split the sides of even the most morose seraphim within the soaring vault of heaven.

How about Matt Bearden briefly ditching those KLBJ airwaves and cracking you up in person? Damn right. How about 2015's Funniest Person In Austin, Danny Palumbo, slaying you with his spectral comedy stylings? Yes! How about an entire Stygian riverboat of local comics taking the stage to channel the dearly departed in one big, creepy … uh … post-mort-a-palooza?

[Note to self: Brenner, settle the fuck down. It's called Comedy Seance. Comedy Seance is the show's name, it's gonna be at Spider House Ballroom on Friday, October 30, at 10pm, and they're only charging $10 at the door, and the whole hilarious thing wraps up with a set from the all-female Misfits cover band The MissyFits. You got that? You able to fucking handle that – like you're paid to do, you pathetic excuse for a journo?]

So, ah, anyway, we … we recently spoke with producer Pengra to ask what we figured was a pretty important question:

Austin Chronicle: Ms. Pengra, isn't there some concern that, having Satan as a host and all, the old devil's gonna try to snag himself a soul or two? Do you think Austin audiences are righteous enough to withstand such demonic temptations? Or doesn't it matter, after all, because the entire city's already gone to hell due to douchey hipster carpetbaggers and real-estate gouging and GODDAMNIT WHATEVER HAPPENED TO LIBERTY LUNCH?

Katie Pengra: Well, Mr. Brenner, everyone knows that Halloween is the one night of the year that Satan jumps out of his hellish toaster oven to give earth a visit. By now he knows not to take advantage of that by stealing souls. That being said, these are the reasons why I've been hired on as his handler. I assure you Satan will act as the professional that we know him to be.

AC: But, the audiences themselves, uh –

KP: As far as Austin audiences succumbing to Satan’s evil alluring, I can't vouch for their ability to stay on the straight and narrow. Satan is eons old, and he's the original smooth operator. He usually leaves the Seance with a few fresh souls on his arm, but they go willingly! I am very excited for this year's Seance, it will be good PR. Satan has, in fact, overtaken the Austin real-estate market and people are not happy. Those who can actually afford to live here don't realize he's placed vengeful demons in every property east of Congress. And – well, that's another problem for another time.