The popular artist reveals his newest prints at Parts & Labour 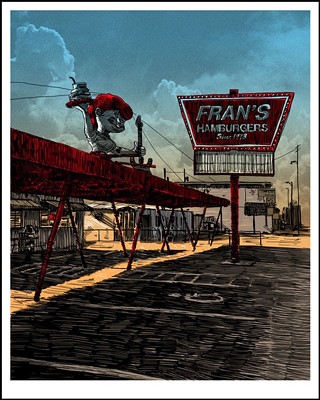 Sure, you know Tim Doyle's work. Because he did that CHANGE INTO A TRUCK take on Shepard Fairey's first Obama poster, right? Where Doyle's version is a portrait of Optimus Prime?

Or you know his work because he did that series of Bill Murray stickers that now adorn the laptops and guitar cases and rear car-windows of fans all over the world. Or because Doyle's been voted Best Artist or some variation of that in your Chronicle's Best Of Austin polls for the past five years.

And maybe you know that Tim Doyle does an annual series called Unreal Estate, debuting at San Francisco's Spoke Art Gallery each year, that features well-known buildings from popular TV shows or movies, rendered in his striking style and produced as limited-edition screenprints?

It features beloved Austin landmarks that are no longer around.

(Mind you, it's a sort of mini-suite of prints – Doyle's revealing only three new works at this shindig – but the quality is far beyond the quantity.)

The show is called "Lost Austin," and it's on display at Parts & Labour right there on South Congress – starting at an opening reception with the artist on Thursday, Oct. 22, from 6-9pm.

What are you, from out of town or something?

Because our city is changing.

Because our city, like all cities, is always changing. But among those who remember how it was, recently or in the more distant past, are people who have the talent and skill to capture how it was. Graphically. With pen and ink. With stylus and pad. With pigments and screens and good thick paper and plenty of that elbow grease shit your hardworkin' grandfather liked to talk about.

And Tim Doyle, the creative dynamo behind Nakatomi Inc., is one of those people.

And Parts & Labour, that local emporium of art and craft and all manner of DIY hometown brilliance, will celebrate this "Lost Austin" debut up right, with snacks and cocktails and possibly enough sweet nostalgia to make you think you've died and gone to Les Amis.

We'll see you there, citizen!