line upon line percussion dials it down for season opener 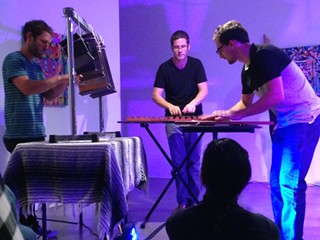 Cullen Faulk, Adam Bedell, and Matt Teodori are going soft, but in this case, that's a good thing (Photo by Robert Faires)

Ssshhhh, line upon line is playing.

That may sound odd if you know this percussion ensemble, as its three members have been known to bang on a can, block, drum, marimba, metal sheet, concrete slab, or other object at volumes equivalent to TNT detonations. But for the first show of their third season at Canopy, they've gone soft.

That's actually the title of the concert, and it features five pieces that keep the sound down almost to the level of a whisper.

It's an intriguing change of pace for the award-winning trio, as it not only requires the line upon liners to rein themselves in and concentrate even harder than they usually do – if that's possible – to sustain that level of quietude but also draws the audience forward, leaning in attentively to catch every delicate ping or tone. Indeed, the intimacy created during this hour-long program is such that, even among the 50 or so audience members in the Canopy gallery space where it takes place, you may feel a degree of isolation, of solitude, as if you're apart from the rest of humanity and catching the distant splash of water against a rock across a beach and the indistinct conversation of a family by it, the light patter of rain dripping off a house's eaves, the muffled chime of an antique clock in another room. Every performance of line upon line's that I've heard has been compelling, but this may be the first that's been contemplative as well.

Interestingly, it's also the one that's offered the most visual stimulation as well. It's always a pleasure watching Adam Bedell, Cullen Faulk, and Matt Teodori strike, stroke, and tickle whatever items they're making sounds with, to see their individual performances and their interplay as an ensemble, and lighting designer Natalie George splashes them with a crayon-box assortment of striking colors, but added to the mix for soft are dance artists Rosalyn Nasky and Lisa del Rosario, who move about the space like silent spirits somehow summoned by the music and affected by it. At times, they will come together and sink to the ground, holding each other intensely as if through a storm that's sounding around them. Then they will separate and walk to a certain space on one wall or in a corner as if signaled to do so by a sound. Repeatedly, one will stop and extend her arm at a right angle to her body, the fingers, which are splayed and cramped with tension, trembling jerkily like wires vibrating from a noise. It's intriguing, especially since the movement seems to come from a place of disturbance and the music inspiring it is so often calm and, well, soft.

The works are varied in their ways – John Cage's Inlets, using shells and water, is performed outside the gallery and out of the audience's view; John Luther Adams' Always Very Soft relies almost exclusively on the percussionists' fingers to make sound; Turn on the light, which line upon line commissioned from Austin composer Travis Weller, alternates soft strikes against metal tubes with bows drawn across their edges, creating extended tones of longing – and all drew the listener into some private place and mood. But the concluding piece, another commission receiving its world premiere, had a special charm to it. Joel Love's In the Gloaming evoked in sound the lovely transition of the world from daylight to darkness. The high brightness of the notes captured the softening of the sky and sudden, winsome glow of fireflies and stars making their appearance in the firmament. In it was that quality of sunset that draws people out of their homes to witness the passage to light to dark together. The music was both lovely and communal, and so brought soft to an especially sweet close by bringing all of us in the audience back to the world together.

line upon line presents soft will be performed Friday, Sept. 18, 8pm, at Canopy, 916 Springdale. For more information, visit the line upon line website.