Everyone will always believe this 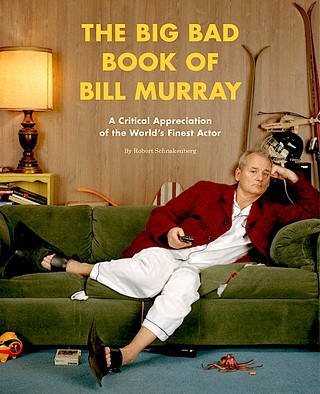 You remember: That one time when Bill Murray was in Austin for SXSW and he just kind of stepped behind the bar at Club DeVille, and later at Shangri-la, and started serving up the drinks?

And that happened because that’s, like, One Of Those Things That Bill Murray Does when he’s not busy acting in one movie or another – and he’s busier than ever with the acting, it seems, even as the world’s beloved master of understated comedy edges toward the deeper end of geezerhood.

The proximity of that deeper end awaiting us all: That’s what calls for a retrospective of anybody’s life. But when the retrospective takes the form of a printed volume – The Big Bad Book of Bill Murray, say, curated by Robert Schnakenberg and published by those canny coves at Quirk Books – when it takes that form, it’s the entertainment value of the subject’s life and career and philosophy that justifies such an object. So already, since it’s a Murray overview, you can figure you’re headed into a winning situation. Unless this Schnakenberg guy somehow fucks it up, right?

Note: Schnakenberg hasn’t fucked it up.

The Big Bad Book of Bill Murray sparkles with anecdotes like the impromptu Club DeVille bartending stint, although that one isn’t specifically referenced, and they sparkle amid a sort of all-encompassing encyclopedia of Murrayana – arranged alphabetically, even, one compelling chunk of information after another, covering all the movies, all the performances, much of the man’s behind-the-scenes personal life – and the whole glossy, well-designed book is further brightened by a wealth of images from Murray’s many film and TV appearances. And plenty of tasty pull quotes, too, for instant engagement. For instance, this snippet from Murray’s speech to the Columbia University graduating class of 2000: “Why should I spend more time on your college graduation than I did on my own? I have a degree, from high school, but I’m a fucking millionaire.”