If only we could see everything in the road ahead of us: the bumps that lie in wait, the treacherous curves, the strange forks where hard choices must be made, the intersections where our paths are crossed by the most unlikely figures. If we could just see where we're going and how we'll get there, then we might save ourselves from so much of the anxiety and dread and grief we expend upon the journeys we undertake. We might be able to move forward with some sense of purpose and peace of mind or, at the very least, hope. But, of course, we can't always see what's coming, and based on what's behind us, what we've already been through, we may feel little cause for optimism or confidence that we're even headed in the right direction. So we stumble along, desiring the best but fretful that the worst lies just around the bend.

Alice, a thirtysomething cancer survivor whose illness has left her unable to bear children, has begun to fear that a family will be out of reach for her and her husband, Jake. Their attempts to adopt have all ended badly, and she can't see a future with any promise. Though she tries to be mindful of all that's good in her life – her health, the love she has with Jake, the phenomenal success of his barbecue business in Austin – there's a widening gulf of hopelessness in Alice's heart, and it's widening the distance between her and her husband, and causing her to doubt her every move.

As Alice's road winds from Jake's very Franklin's-like eatery to the Eastside high school where Alice is awkwardly trying to provide some life support for a troubled student to Colorado, where members of Alice's family are experiencing their own bumps in the road, the reader is also introduced to Carla, an 11-year-old whose life in Tegucigalpa, Honduras, is rapidly unraveling. The village where she lives has grown increasingly dangerous, the grandmother who has cared for her since Carla's mother emigrated to Texas years ago has grown weak, and Carla's younger brother has begun turning to the glue that numbs the pain of so many who live around them. Carla feels pulled toward the U.S., to join her mother, but the journey out of her homeland, through Mexico, and into the States is a harrowing one for anyone, no matter their age. She takes a desperate step, but with no confidence that she will survive the long road ahead. Author Amanda Eyre Ward keeps us shifting between the journeys of Alice and Carla in alternating chapters whose brevity belies the fullness of feeling they reveal in their characters: their uncertainty, their pain, their despair.

Anyone who lives in Austin or who has spent much time here will recognize the city as Ward has portrayed it here, and the lives of Alice and Jake are so vividly detailed as to seem almost stolen from the biographies of people you know. Considering the author's personal history in the Live Music Capital, it's hardly surprising that she gets the rhythm and heartbeat of its citizens so right. What's unexpected is how authentic Carla's world and experiences feel set next to them. Ward spent substantial time with immigrant children in shelters in Texas and California while writing The Same Sky, and it shows. The details of their histories that she has worked into the novel are such that Carla's journey from Honduras to El Norte feels not merely credible but distressingly real.

The quickness with which Ward moves us along these two very different and yet curiously parallel road makes The Same Sky seem a deceptively easy read at times. But Ward is a careful writer and can pack a wealth of emotion into a handful of words. Moreover, the depth of compassion in Ward’s characterization of her two protagonists helps Carla and Alice work their way under our skins, and with every step they take on their separate yet linked odysseys, they inch closer to our hearts. By the end of the novel, they've taken up full residence there, and I expect the two of them to remain in mine for quite some time. They've become real enough to me that from now on I imagine I'll be on the lookout for them every time I cross 35 into the Eastside. 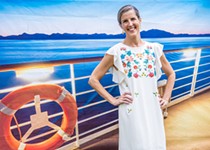 Come Sail Away With Amanda Ward's The Jetsetters
Local author asks, "Won't you let me take you on a sea cruise?"