How Many Fables in the Naked City?

More than usual this weekend, thanks to Vertigo and Natalie Frank 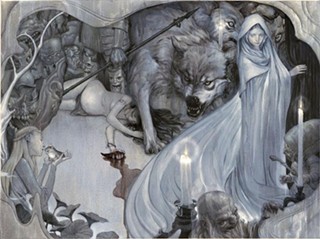 There’s Charles Perrault and the Brothers Grimm. And maybe Mother Goose can be stretched beyond those nursery rhymes? And there’s, of course, others. And then there’s what has become of ye olde fairy tales in these modern times.

The latter is, of course, the long-running comic book series from Vertigo, the one written by Bill Willingham, edited by Shelly Bond. You know: The complex narrative wherein all the denizens of the universe where fables are real have to move to (and hide in) this universe, in this world – in, say, Manhattan. You know: The delightfully inventive array of tales that would’ve been worthwhile even if they were only an excuse for so many brilliant James Jean covers.

But did you know that the Fables series is coming to an end, wrapping up, totally el finito after a dozen years? That’s why Austin Books & Comics is throwing a Great Fables Wake this weekend, with the abovementioned Willingham and Bond and other writers in attendance, with Adam Harrington (the voice of Bigby Wolf in The Wolf Among Us video game), with book-signings and live interviews and performances and games, and, oh, all manner of Fable-licious shenanigans on Friday, Saturday, and Sunday. Yes – right there in what they call the Center of Austin Fandom at 51st & North Lamar.

But what does the name Natalie Frank have to do with any of this?

This: The person behind the name Natalie Frank – the person named Natalie Frank, in fact – is the artist responsible for that mindblowing Brothers Grimm show currently at the Blanton Museum of Art. And if you like those James Jean Fables covers, dear reader, imagine the talented Mr. Jean collaborating with Jean-Michel Basquiat and Lorenzo Mattotti … and you’ll have a slight idea of the color-wracked and dreamlike works that Natalie Frank has created to illustrate tales from the Brothers Grimm all vivid on the Blanton’s upstairs walls.

[Note: Here’s an even better evocation of the show – and an interview with the NYC-based artist.]

In any case, yes, there are many fables in the naked city, in the clothed city, in the you’d-better-put-some-sunblock-on-that-junk-or-you’ll-regret-it city this weekend. And maybe you’ll want to stop by and avail yourself of some friendly weirdness and glory on your way to, ah, grandma’s house? With a pocketful of breadcrumbs? As you nervously clutch your copy of Kirk Lynn’s Rules for Werewolves?

Here’s to living happily ever afterparty!