Artist Shawn Camp Offers a Hint of Light in the Darkness

New exhibition at Northern-Southern breathes in the Aphotic Zone 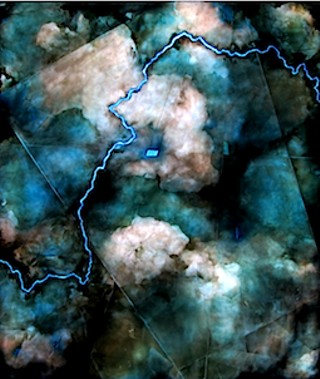 Two questions: 1) When is an artist like an airplane? 2) What do you get when you cross the aurora borealis with several acres of land?

Note: The eyes are what make the difference, they say, between a regular person and a creative person. You've heard this, right? This whole thing about a supposedly intrinsic distinction that's predicated on vision – even if only metaphorical vision?

"Oh, he's so creative," someone says. "Yeah, he's really got an artist's eye," says another.

As opposed to artists being people like most other people, really, except that they expend the time and effort to train themselves to see the world in a different way, regardless of what nature and/or nurture may have wrought vis-a-vis their basic human perceptions? And then, with more time and effort, to concretely express what they've seen?

Regardless: You put any pair of eyes in an airplane and have those eyes look out the window and down at the ground from which they mechanically flew, those eyes are going to get a different perspective on things. And if they're the eyes of Shawn Camp, and thus part of that man's whole sensorium and the bright consciousness that works in concert with it, they're going to get some ideas.

"My first semester at grad school, at Virginia Commonwealth University, it was one of the more frustrating, miserable parts of my life," says Camp, over coffee and phở at Elizabeth Street Cafe. "I left the band that I had, the people I was really close to, left everyone, left my girlfriend. Didn’t know anyone in Richmond, and I couldn't figure out what I wanted to do. And that December, flying back across the country for the Christmas break, that’s when – I know it sounds kind of cheesy, but – staring out the window of the plane, and the whole idea of the landscape and the relationships between the natural forms, it became a kind of pretext for a lot of the work I was doing."

A lot of the work he was doing? Replicating what he'd seen from on high.

"The first pieces were really literal," recalls Camp, whose newest exhibition, Aphotic Zone, opens this Friday night at Northern-Southern Gallery. "I was using photographs that I’d taken, kind of compiling them together to some degree, and even including cars and roads and buildings. And then, from there, everything that seemed extraneous, I kind of jettisoned. And what was left behind was real subtle. And flat, too. It wasn’t until I came to Austin that I started working with thicker paint."

Thicker, he says: In order to render visions originally pulled through thin air. The resultant artworks, as critic Benné Rockett wrote back in 2006, "made of buttery fat chunks of paint atop uneven palette-knifed areas revealing small secret wisps of collaged words, are topographical and aerial in theme, emphasizing swirls of grasslands and rivulets, clouds, and stars."

And by the time your current reporter chimed in, for Camp's 2011 show at Gallery Shoal Creek, the review spoke of "a barren Earth rendered with a depth and density that also brings to mind what we know of the atmosphere of Jupiter … stunning reds, algal shades of green, whites and grays mixed like some matte mother-of-pearl in a depressive phase – gone approximately two-dimensional."

But … we'd mentioned the aurora borealis, hadn't we, at this post's beginning?

That's because of the Aphotic Zone. That's because, look, do you have an approximation in your own mind's eye of the sort of stunning beauty Camp's been assaying since he moved to Austin in 1999? Of the whole abstracted-aerial-photography-via-polychrome-impasto kind of thing?

It's the sort of technique that an artist can't really improve upon, right? No single work or series is necessarily better than another in that now-familiar style, within those same aesthetic parameters, right? The various works are just, you know, equally effective but different, right?

Because Shawn Camp has taken that thing that he does and made it even better.

Shawn Camp, with the pieces going up for Northern-Southern's Friday night opening, has made a hackneyed business-bullshit phrase shine with actual meaning once more: He's taken his art to the next level.

Camp's committed a few of his vast, aerial-view, thickly painted landscapes on clear Plexiglas this time. He's worked on them for months and months and months, lavishing much time and effort and sweat and judgment, so that the results look as amazing as his previous works – when the lights are on. But also so that the immense panels, now strategically backlit, will transform into completely different vistas whenever darkness reigns. Vistas – formed of layers of pigment painstakingly applied to allow for some overlapping translucences here, a swath of opacity there, often a thin and jagged vein of blue like an electrified riverrun from swerve of shore to bend of bay – vistas that I'll swear evoke the abovementioned mash-up of aurora borealis and several acres of land.

Yeah: This is some next-level, heavy-duty, dream-provoking shit we're talking about, here.

Note: The lights in this Aphotic Zone will cycle slowly on and off throughout the exhibition, "from dim ambience to total darkness."

See you there, friend.