Gettin' Hot Under the Collar

Hotter Than Hell Burlesque revs up I-35 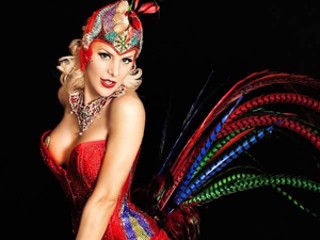 Scarlett James, one of the performers raising the temperature this weekend in Austin and Dallas for the third annual Hotter than Hell

There's a hot wind blowing in from the North this weekend, and not everyone will be keeping their clothes on when the temperature rises.

Friday night, the Hotter Than Hell burlesque show works out all the kinks (pardon the pun) up at Dallas' historic Kessler Theater, before throwing all the sequins and snap fasteners in the trunk and heading South in what one can only imagine is the world's most glamorous caravan. Destination: Austin's own Stateside at the Paramount, where Saturday night will find some of the nation's greatest ecdysiasts, most talented peelers, and downright devastating bump-and-grinders will be sending sparks flying.

Austin can't claim all the credit for the show. Hotter than Hell was originally the creation of the Big D's La Divina productions in 2011. But since 2013, they've been teaming up with Austin's own Ruby Joule, founding member of the Jigglewatts, to bring the show down I-35 to the state capital. Joule said, "There's a road trip involved, but then again you're travelling with people you like and who you like to work with. That's part of the fun."

While Hotter than Hell maybe be the biggest co-production between the two cities, it's part of a year-long cavalcade on shared shows, including Spring Fling, New Year's Atomic Frolic, and the classically naughty Hollywood Nocturne. Each night sees a slightly different line-up, Joule said, "because we have out-of-towners, and then we have people who are based in Dallas and Austin."

This weekend's show features not only La Divina and la Joule, but New York's self-declared Asian Sexsation Calamity Chang and the deceptively demure Grace Gotham, Iva Handfull from Seattle, and the Frozen North's favorite ice melter, Montreal's Scarlett James. Plus we heard a wild rumor that the hostess with the mostest, the incomparable Cora Vette, has been sighted within state lines. This is some of the very finest that the world of burlesque has to offer, working with some of the Lone Star State's greatest. Not that they're so shabby either. "Texas has so much talent that I would consider global," Joule said. "Everybody gets this mini-tour experience, and when we bring in headliners from out of town, it's nice to be able to show them off in both cities." 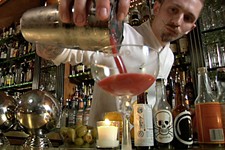