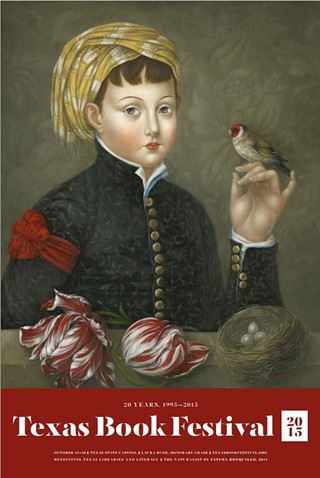 On Thursday, the Texas Book Festival announced the first slate of marquee authors for the 2015 edition, and as befits an event marking its 20th anniversary, the list include 20 names.

Of course, that's less than 10 percent of the literary lights who will wind up attending this Lone Star celebration of the written word Oct. 17 and 18, but as a sampling of the talent and prestige on tap for this year's weekend of readings, signings, and panel discussions, it's still, shall we say, quite dazzling.

I mean, what else can one say when the top of the list boasts the Booker Prize-winning author of The Blind Assassin, who also happens to be the genius behind The Handmaid's Tale, Cat's Eye, and Oryx and Crake, Margaret Atwood? (Her new novel The Heart Goes Last is due Sept. 29.)

Then there's Elizabeth Strout, the Pulitzer Prize winner for Olive Kitteridge and winner of the 2015 O. Henry Prize for her short story "Snowblind," which will be published in The O. Henry Prize Stories 2015: The Best Stories of the Year.

And Wendell Pierce, known for his stellar acting work on The Wire and Treme, who has just penned The Wind in the Reeds: A Storm, A Play, and the City That Would Not Be Broken, a memoir covering his family and hometown in the wake of Katrina. Also with a fresh memoir, Negroland, is Pulitzer Prize-winning critic Margo Jefferson.

Adrian Tomine, the graphic novelist and illustrator for The New Yorker, will be on hand to talk about Killing and Dying, a new collection drawn from his ongoing comics series Optic Nerve. And Chuck Palahniuk, the man we can thank for Fight Club, might be willing to discuss the new comics series sequel to that book that he's publishing through Dark Horse, as well as his recently released short story collection, Make Something Up: Stories You Can't Unread.

Making an international splash will be Alejandro Zambra, the acclaimed Chilean author whose short story collection My Documents has just been translated into English.

That's not to say that Texas won't be well represented. University of Texas history professor and Pulitzer Prize finalist H. W. Brands will be talking about his latest biography, Reagan: The Life. San Antonio literary treasure Sandra Cisneros has a new collection of autobiographical and nonfiction pieces, A House of My Own: Stories from My Life. Attica Locke, who's been busy of late as a writer and producer of the hit TV series Empire, has also just released her third novel, Pleasantville, set in her hometown of Houston during the 1996 mayoral race. Saeed Jones, the Literary Editor at Buzzfeed who grew up in Lewisville, Tex., will be representing his 2014 poetry collection, Prelude to a Bruise, which won the 2015 Stonewall Book Award/Barbara Gittings Literature Award. Aaron Franklin will leave the pit long enough to promote his new tome, Franklin Barbecue: A Meat-Smoking Manifesto. And historian Stephen L. Moore will provide some lessons in our state's history via Texas Rising: The Epic True Story of the Lone Star Republic and the Rise of the Texas Rangers, 1836-1846.

Also announced this week were award-winning designer Chip Kidd, whose new book Judge This is a look at first impressions and how they not only relate to design but also shape our lives; humorous essayist Sloane Crosley, whose first novel, The Clasp, is due in October; Dallas actress Linda Gray, whose memoir The Road to Happiness is Always Under Construction reveals her secrets to success; YA novelist Marie Lu, who's just completed The Rose Society, her sequel to The Young Elites; Jason Reynolds and Brendan Kiely, who are coming to share the story of their racially charged novel All American Boys; Newberry Medal winner Avi, whose new book with illustrator Brian Floca is titled Old Wolf; and amazing illustrator Raúl Colón, whose talents have resulted in a new classic, Draw!

Speaking of artists, you can spend the three months between now and TBF weekend admiring the poster art by Fatima Ronquillo, an elegant that looks as if it might be several centuries old, which has the feel of both the Old World and the New World, of past and present, of nature and civilization … it tells a story of the kind we love to discover in books. (Ronquillo now lives in Santa Fe, but she is represented locally by Wally Workman Gallery.)

More details on the 20th Texas Book Festival as they're released. For more information, visit www.texasbookfestival.org.