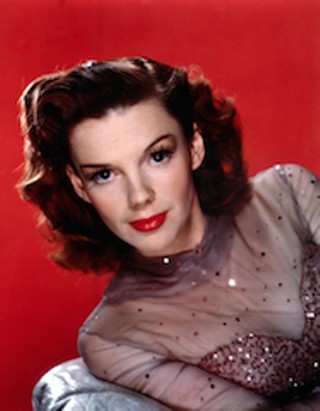 No, your ears aren't deceiving you. That voice you're hearing on longtime classical radio station KMFA, nestled among Maria Callas and Renee Fleming, is none other than Judy Garland. And that ain't some Puccini aria she's trillin', but "The Trolley Song" from Meet Me in St. Louis. Clang, clang, clang!

Now, this isn't a sign of KMFA abandoning kunstlieder and cantatas for show tunes, but it does represent the debut of a new program at 89.5FM devoted specifically to American musical theatre. Icons of Broadway, which premieres at noon Saturday, July 11, will devote an hour each week to a single artist who made a profound impact on the musical form. Listeners will be given an overview of the artist's life and career, along with musical selections that reflect that individual's talent, creative development, and influence. Up first is Judy, a bona fide icon whose impact is so substantial that it will be covered in two episodes. In the remainder of the 13-episode first season, the program will focus on performers Mandy Patinkin, Barbra Streisand, Julie Andrews, Audra McDonald, Brian Stokes Mitchell, and Patti Lupone, as well as composers Stephen Sondheim and Leonard Bernstein.

The series is the brainchild of Mela Dailey, a local artist with extensive experience singing both classical and popular song. She performs regularly with Conspirare and has been a soloist with the Austin Chamber Music Center, Austin Symphony Orchestra, Chorus Austin, Texas Choral Consort, and the Capital City Men's Chorus, as well as orchestras in Dallas, Chattanooga, Rochester, Spokane, Edmonton, and Vancouver. While appearing as a guest on KMFA last fall, she was told by station host Bob Buckalew, "You should do a show on musical theatre." "And I woke up one morning," says Dailey, "with the entire first season scripted out."

She pitched the idea to KMFA President & General Manager Ann Hume Wilson, who not only liked it but thought it a good fit for the station. “KMFA has played great orchestral Broadway music for many years in its daily programming," says Wilson. "So the idea of a Broadway show is a natural extension of that, and something our listeners have been asking for.”

Dailey had no interest in just choosing a musical, setting the needle down on Track One, and letting the whole thing play out, uninterrupted. For her, the program needed to be about paying tribute to the contributions of the artists. "They've shaped what we think of when we think of The Wizard of Oz," she says, noting Garland's performance as Dorothy, "or Sunday in the Park With George. Mandy Patinkin made that role." To give the listener a full sense of her Broadway icons, Dailey has done deep research into their careers, scripting the biographical material herself as well as providing the narration between musical selections.

And she isn't shying away from the difficult parts of their lives. In the first episode, Dailey is candid about Garland's enslavement to the studios, her failed marriages, and her substance abuse. "It's the bad stuff that makes her the performer that she is," Dailey says. "And it makes her the person we can relate to. She's living some things that are extremely painful." Icons of Broadway "isn't a gossip show, but it's important to be honest."

Dailey has also invested a great deal of effort in choosing what music to play for each spotlighted artist. With a catalog as large as Garland's, even two hours wasn't going to give Dailey the time to include every cut that she wanted, so she sought input from friends. A post on social media asking people to name their favorite numbers by Judy elicited 250 responses. Then she pulled together as much recorded material as she could and sat down with her husband, ASO Music Director Peter Bay, for "an 8-hour date" in which they "listened to everything" and debated what to include on the show. Of course, they went with classics such as "Over the Rainbow," "Have Yourself a Merry Little Christmas," and "The Man That Got Away," but, she notes, "sometimes we wanted to take a little bit of the path less traveled," so for one of her signature numbers they went with something that Garland recorded later in her career – say, "What'll I Do" or "Here Comes That Rainy Day." The result, she says, is "a study in what life does to a great, iconic performer."

Dailey also wanted the show to move beyond the expected and established, to include an element that's live and fresh. So each episode will also feature some song identified with the spotlighted icon, as performed by Dailey or artists she knows, recorded in the KMFA studios. It's a personal touch, a way of providing a sense of just how far beyond Broadway these icons have reached and made a difference in peoples' lives.