The Non-Frenzied Feeding of a Large Squalus 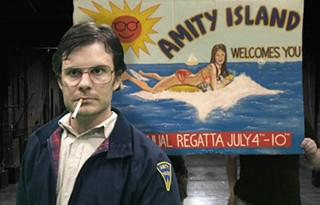 It's only an island if you look at it from the water.

Everybody is kung-fu fighting across the USA in the mid-1970s, but in the waters around New England's Amity Island, people are being eaten alive, one by one, by a Great White Shark gone rogue …

Of course you remember Steven Spielberg's big movie, Jaws – the prototypical summer blockbuster – which is celebrating its 40th anniversary this year, right?

The cinematic spectacle scared everyone away from the surf when it debuted back in 1975 and lodged a drunken Robert Shaw's recitation of the fate of the USS Indianapolis deep into the public brain.

What better way to celebrate this anniversary, O sharkophobic beach-lover, than by seeing what the zanies of Old Murder House Theater have created in homage to the classic film?

Yes, it's the gang that brought the world live-action, goofy-propped, over-the-top renditions of Jurassic Park, Aliens, Robocop, and more. They're back again, hallelujah, this time performing the whole Brody/Hooper/Quint shark hunt for your laugh-wracked pleasure. Who? Listen: Byron Brown is Chief Brody; Kirk Johnson is Quint; John Merriman is Hooper; Sam Eidson is Larry Vaughn; Nathan Sakulich is Ellen Brody; and Carlos Larotta is the Deputy.

The indefatigible Eidson also directs … and right now we're directing your attention to this link.

Because that link will take you to where you can get tickets to see the bloodsoaked, comedic terrorfest at Scottish Rite Theatre on Fri-Sat., July 3-11, at 8pm – right here in the good ol' non-shark-infested ATX.

Farewell and adieu, you ladies of Spain …