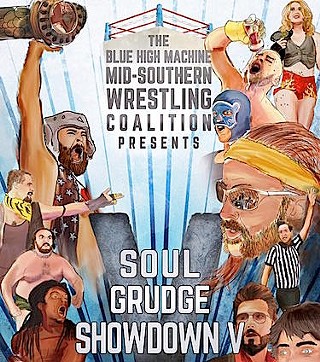 Some people will tell you that professional wrestling is fake. Those people are full of shit.

You think the blood is fake? You think those athletic men and women in their skimpy yet often elaborate Spandex aren’t actually expending much effort and vigor, risking injury and disfigurement as they grapple for glory in the squared circle of physical combat, the artful arena of maximum mayhem and magisterial mishegoss?

Maybe you should suggest that to the Blue High Machine’s Duke “Rooster” Cartwright. He’s the current champion of the Mid-Southern Wrestling Coalition, the King of Rock incumbent, having utilized his signature Speedball maneuver to tear a muscle-wracking, sweat-moistened path to the top of last year’s Soul Grudge Showdown 4.

“Fake?” says Cartwright, a scowl darkening his rugged features. “Tell you what,” he says, jabbing an index finger against your reporter’s chest. “Tell you fucking what. You get inside the ring at a no-holds-barred match with Maniac Mick McKenzie and have your back broken in three places, then you tell me that it’s fake.”

But – hold on a second. Surely there isn’t any actual person named Duke “Rooster” Cartwright, right? Surely this is actor and improviser Michael Joplin, one of the original founders of the wackadoodle wrestling parody that began during the first MOMfest more than a decade ago, that returned after a long hiatus to rock the Off Center with last year’s popular spectacle?

That is you, isn't it, Joplin?

And aren't you also a DJ, spinning vinyl around town as MANATEEMANN? And didn't we recently see you as an incarcerated felon in that intense Adrienne Dawes show Am I White? and as one-third of Hannah Kenah's hilarious Everything Is Established?

And these other characters – Bill Royal, “The Physical Jerk;” Shakes Vigorously, “360 degrees of wrestling perfection;” Debbie Decimal, The Menacing Librarian; the savage Koopa Tropica; Professor Pain and the entire Hayes dynasty – these and the other men and women who’ll be going all rampant between the turnbuckles, stomping each other senseless at the Off Center as the Blue High Machine Band rocks metally into the night and the by-donation beer flows like blood through the veins of a warrior whose hemoglobin is based partly on hops … all these other steely-eyed and spittle-flecked combatants … they’re all local actors and comedians, too, aren't they?

The overt aggressions, the wild backstories, the Flying Leg-Scissors that morphs into an Ape Sex Suplex and sends some hapless opponent to the hospital. This is just an elaborate put-on from Gnap! Theatre Projects, isn’t it? You’re all just, ah, kidding – right?