One can get one's Moontower Comedy fix practically all over Downtown: The Paramount, of course, being the White House for its spate of headliners over four nights, the Stateside next door as, say, Martha’s Vineyard, then smaller venues like the Parish and Speakeasy to catch some burgeoning talent that will be the fest’s heavy-hitters in future years.

But if you were fortunate or well-connected enough to have just parked yourself at the Paramount on Friday night for what was a total of seven hours of world-class comedy from the likes of Wanda Skyes, Patton Oswalt, Pete Holmes, and TJ Miller, then congratulations: You won April 24, 2015.

The latter two comics closed out the night and locked up afterward following their midnight twin bill. Holmes and Miller, as it turns out, weren’t paired together by sheer coincidence. No, it’s much sweeter than that. They’re buds, don’t ya know! Stylistically, they’re kind of dissimilar from each other. Holmes, of course, is the goofy, affable, youth-minister-looking guy who hosts a successful podcast, You Made It Weird, and formerly followed Conan on TBS with a late-night talk show of his own, titled simply The Pete Holmes Show. He’s a fun guy, that Pete Holmes; and frankly he’s one of the better comedians in the business these days for both the clip and boisterousness of the laughs he gets. What makes you root for him even more is that he tend to laugh at his own jokes, which in the case of a comedian whose jokes most always land with a bang, it’s rather cool. Holmes has played Austin numerous times and even recorded his 2013 comedy album, Nice Try, The Devil, at ACL Live.

His buddy TJ, on the other hand, isn’t quite as well-known in these parts.

A Denver native who’s recently been enjoying a successful acting career primarily on the strength of his work on Mike Judge’s HBO series Silicon Valley, is definitely a comic worth trying to keep up with. Last night he performed looking like a kid playing dress-up in one of his dad’s business suits, a baggy (and probably unironed) drapery of grey and white that perfectly complemented his long, stringy hair and scruffy beard. He looks (and sometimes speaks in a stream-of-consciousness manner) like Russell Brand – that is, Russell Brand minus the rich, buttery vanity and, although this is pure conjecture, the chlamydia. Miller’s style, which is fluid and can’t necessarily be pigeonholed, is, however, probably best encapsulated by one of his closing bits from last night about a character he made up who, wait for it, “gobbles snarfs.”

“Gobbling snarf, which as you know, a snarf is when you sneeze and you barf at the same time. So (his) family trade was sort of (sucking noise), gobbling that snarf down, it’s awful. Imagine it. It’s awful. At one part he quit, left the family business, he tried to go out on his own, he tried to snarf gobbles. In this economic climate?! You know, he’d (go) into the turkey fields, he’s snarfing down their gobbles, it’s gross, it’s just a sound, he’s like (horrible inhaling noise), you know? He couldn’t make a living, had to go back, tail between his legs, back to gobbling snarf. Two years ago, on this day – or one of the days during this month – he got really drunk during flu season and he fell asleep on his back, on purpose, and he snarfed in his sleep and died gobbling his own snarf.” 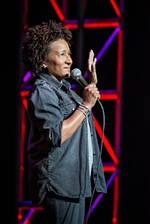