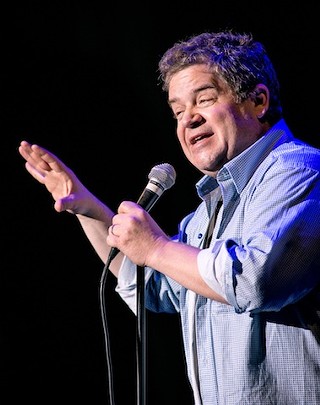 “I’m so undeservedly confident tonight in how great this show’s gonna be,” comedian and Moontower Comedy Festival headliner Patton Oswalt told the capacity Paramount Theatre crowd moments after taking the stage for what became a sterling 45-minute set.

Of course, the 27-year stand-up veteran, now a 46-year-old family man, said that with respect to reminiscing about the worst show of his life as a wide-eyed youngster in Roanoke, Va.

“No matter how badly if I happen to take this thing and take if off the rails and tank it, it still will not be as awful as the worst I’ve ever done. I’ve already checked that box off. I’m free! I’m fucking free! (But) the day of the show, I get the worst stomach flu I’ve ever had, ever.”

Knowing Oswalt’s easy facility for providing eloquent and graphic descriptions of everything from heinous bodily processes to the mad science and despair inherent in our nation’s fast food culture, you can imagine how funny and vivid his recount of having blasted waste out of both ends before having to perform truly was.

“So,” Oswalt continued, “they introduce me, and it’s a packed show on a Saturday night, ‘Ladies and gentlemen, Patton Oswalt.’ I start walking toward the microphone, I get halfway there, and a guy in front row said, ‘Faggot.’ And by the way, he didn’t yell and go, ‘Faggot!’ He said it like a museum tour guide, he’s like, ‘Faggot, right there. Then there’s a Warhol, and then right over there, that’s a faggot.’ And the crowd goes crazy, it was the greatest thing they’ve ever seen, (and) I began to gently shit my pants. I started to shit!”

Many comedy enthusiasts around here know that Oswalt is no stranger to Austin. From recording his acclaimed 2007 comedy album Werewolves and Lollipops at Cap City Comedy Club that year to playing the Comedy Stage at Fun Fun Fun Fest in 2013, Austin loves Patton and vice versa. He even went against type last night and put in some crowd work near show’s end, peppering some locals in the front row about their jobs. None of which, suffice to say, were nearly as cool as his.