Comedian patients spill all to the droll therapist in inspired session 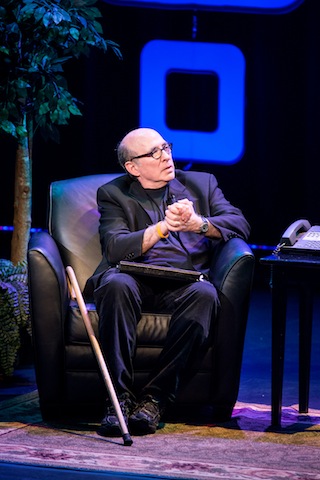 The doctor was in at Moontower Thursday. About a month shy of the 20th anniversary of the premiere of Dr. Katz, Professional Therapist, comedian Jonathan Katz reprised his signature character in a staged clinical setting with Dana Gould, Maria Bamford, Andy Kindler, Dom Irrera, and Emo Phillips.

Of course, the brilliance of Katz's old Comedy Central show – which essentially came to an end in late 1999 – lay in its rather simple yet ingenious concept of comedians in therapy. Not only that, but there was always something vaguely cruel about the doctor’s oftentimes detached and dispassionate attitude toward his clients. With merely a pair of leather chairs skewed toward each other on the Stateside stage, the evening’s patients took turns rambling, emoting, and trying to get in touch with themselves.

Gould and Katz mused about whether Lee Harvey Oswald, had he lived, would remember where he was the day Kennedy was shot; Bamford dished about her recent marriage; Kindler, in a brilliant sequence of ad-libbing during technical difficulties with his microphone, bemoaned his lifelong curse of “never being heard”; Phillips, of course, rattled off one wild non sequitur after another – all this while the good doctor, playing it straight and noticeably bored as ever, sat back peering into his ledger, perhaps doodling like his "Squigglevision" version used to do on the show.

Because the performance was live-action, it went without the visual aids that depicted each comedian’s jokes as they were being spoken on the show, but one particular staple from the Squiggleverse did make its triumphant return when Dom Irrera dropped in to flesh out his creepy yet irresistibly endearing affection for Dr. Katz (for one thing, Katz kept having to demur at Irrera’s gnawing urge to spoon).

Jonathan Katz, now 68 years old and with a voice tailor-made for NPR, has been battling multiple sclerosis since 1996. For most in the audience Thursday night, this performance was likely their first public sighting of him. Although Katz has walked with a cane for some time, that mild-mannered delivery and shockingly crass wit of his commanded the first 10 minutes in a hilarious stand-up segment about “Double-Date Rape,” fatherhood, and more.

Together with last year’s Kids in the Hall performances, Dr. Katz Live will go down in Moontower history as one of the most unique offerings that the Austin comedy festival has put together in its short, four-year existence.