Terry Maker's "Holy Fool" is a Divine Manifestation of Art 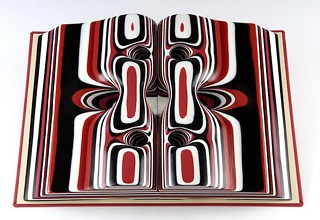 Q: Who is this Holy Fool showing work at Austin’s excellent grayDUCK Gallery?

A: She’s Terry Maker, an artist working out in Colorado, who “uses a variety of commonplace, discarded, domestic objects combined with traditional art-making materials to compose sculptural forms that are subsequently cast, cut, drilled, and scraped to reveal the ‘guts’ or the polished veneer of the matter.”

Q: Why should anyone care?

A: For the very reasons through which art gains its power and holds a viewer’s attention in thrall even when the viewer is no longer in the same space as that art. There are three main ways, we reckon, that art can do this. 1) By being so beautiful, so visually compelling, that any theme or extravisual commentary or subtext is superfluous. Anyone with basic ocular perception can enjoy this sort of art, and a lot of pretty but meaningless work is wrought in this fashion. 2) By embodying or suggesting concepts that, as they say, “make a person think.” This can range from intellectual button-pushing toward obvious notions to the more subtle, oblique provocations toward deeper contemplation. Maybe the smarter you are, the more you’ll appreciate this sort of thing. 3) By providing evidence of extreme craft, of hours upon hours upon days and weeks and months spent in skilled efforts to render, finally, the artist’s vision in corporeal form. We don’t especially like Thomas Edison in these parts (because Tesla), but that thing he supposedly said about “10% inspiration and 90% perspiration” really resonates inside our handiwork hearts.

Q: OK, but what does that have to do with Terry Maker’s show at grayDUCK?

A: Yes way, friend. Whether it's Maker’s variations on the resin-cast contents of suitcases (which have also been cast in resin), or her series of giant belts hanging from humungous nails along one wall, or those horizontally displayed cityscapes engineered from bits of painted wood and plastic and resin-cast spires, or those oversized and sculpturally self-portrait-embellished paeans to childhood candies Sugar Daddy and Tootsie Pop … all of these unique fabrications are visually stunning in one way or several, all of them provide a spark to greater cogitation (often through a sort of arch humor), and all of them, well, we don’t want to think about the sheer amount of physical industry that Maker must have spent to – we mean – uh – we can’t even.

A: Like those belts! Giant belts, the size of which would possibly accommodate Paul Bunyan’s girth. But they’re not just fashioned from leather and then embellished, which would be cool enough. No, this is Terry Maker, so the belts are cut from flexible sheets formed from multiple layers of resin, and then they’re drilled and sanded and have straps and buckles attached so they’re like actual giant belts, and then they’re decorated with, oh, a set of resin-cast vertebrae, say … a series of black horns … an eerie line of artificial eyes. What sort of giant would wear such a belt, we’re led to wonder. Pecos Bill as fashion-fabulous club kid? The Incredible Hulk as fetish-obsessed sartorialist? Is he maybe in the back room right now, changing clothes? Where are his pants?

A: We’re a bit biased towards that grayDUCK, admittedly. But this exhibition, it reminds us of the impact of the amazing “As Above, So Below” show Domy Books hosted years ago: It may well be the best thing the ’DUCK has offered thus far. Yeah, definitely see it – it's up through May 3rd, and Saturday afternoons are a great time for visiting.

(Oh, and here's another idea, beyond the food for thought: Stop at nearby Launderette and get yourself a Plancha Burger afterward.)