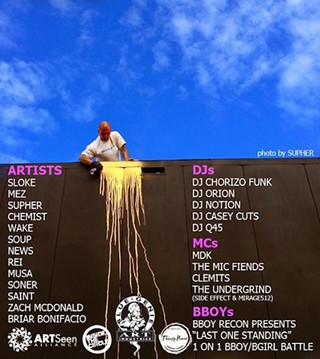 The four elements of Hip Hop culture – DJs, MCs, breakdancing, and graffiti – will wreak a vibrant alchemy this Saturday at Blue Genie Art Industries as Rachel Koper and Nate Nordstrom present this year’s incarnation of the annual EMERGE.

Koper: I’m calling it “We’re Gettin’ the Band Back Together.” Nate and I’ve pieced this together.

Nordstrom: It’s been ten years we’ve been working together.

[Note: Koper, who ran the much-missed Gallery Lombardi back in the day, is now the program director for Austin’s Women & Their Work gallery; Nordstrom is an artist better known by his eyeball-grabbing nom du aerosol, SLOKE.]

Nordstrom: The first one I worked with Rachel was back in 2006, and – didn’t you curate that one with Matt Rodriguez?

Koper: Yes, because first I did “Poutine Never Sleeps” with the Canadian graffiti artists. And then I did “Beans and Rice” with Matt Rodriguez.

Nordstrom: We have a lot of heavyweight Texas graffiti artists for this EMERGE. A lot of them are local, but we also have Dallas and San Antonio represented, we have the Valley.

Koper: We’re very proud to have NEWS in the show. He’s a really talented young guy from McAllen.

Koper: The gallery we’re setting up is gonna have original artworks. A couple of the artists are bringing prints, but most of it will be aerosol on canvas, aerosol on panel, or mixed-media like aerosol-and-marker combinations. And we’ve got Musa, who’s a wildstyle artist from Barcelona, she works for Spanish Montana – which is, like, one of the best paint companies in the whole world.

[Note: There will also be live painting going on throughout the event.]

Koper: That’s right! SUPHER from San Antonio’s gonna paint. WAKE will live paint, Dave Lowell will live paint – he’s a stencil artist, so there’ll be that, with the two wildstyle paintings, right there at Blue Genie, with the music and the breakdancing. And, Blue Genie, that’s going back to my roots, to people I’ve known for years. Kevin Collins was like, “Yeah, you can use my whole warehouse, Rachel.” I love those guys, glad to have a chance to work on a project with them again.

Nordstrom: Back when EMERGE started out, it was with Warren McKinney from Art Seen Alliance – and he’s still an essential part of it.

Nordstrom: – and the lighting. And Warren approached me in 2009 – he’d been doing shows at what was then the Art Authority at Spider House. And he wanted to do a graffiti art show, but we wanted to incorporate the four elements of hip hop: the DJs, the MCs, the breakdancers, along with the graffiti. And it just took off.

Koper: Everything together is so interesting, such a diverse community – it’s what makes the show so vigorous and vital.

Nordstrom: I think the thing that makes EMERGE special is that, aside from the talent – whether it’s from Gallery Lombardi days or new kids or whoever – is that everybody comes together and pitches in to make it work. This will be our fifth EMERGE show, and the response we’ve gotten from the community is really positive, there’s always a lot of people there. 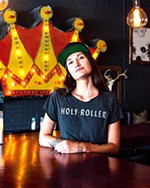 Holy Roller Closes, the Brew Brotha Ferments, Launderette Loves You for Voting, and More
All the news that’s fit to get your taste buds quivering

Italian Powerhouse L’Oca d’Oro Returns
He won’t be in your kitchen, but Fiore Tedesco’s got you covered