Does it get any better than this comic in a true club setting? 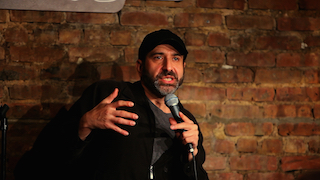 The latter was, in all sincerity, warming up to perform at a detention center in Brazos County the next day – as though having answered a casting call for the Johnny Cash of dick jokes.

By show’s end, both comics met onstage to cross-examine audience members they’d invited up in what became half-roast, half-meeting-of-the-mouths. And although Ross’ opening set killed – having featured some unplugged songplay titled, “I Wanna Eat Your Mother’s Vagina Like a Mango” – the night belonged to Attell, who also headlined Cap City the following evening. The bearded, disheveled, and wildly hilarious stand-up, now 50, hit the stage looking customarily derelict: sporting a familiar look suggesting he’d just been airlifted from a Dumpster or, as Ross phrased it, evoking “an umpire in a windstorm.” But that’s the guy that we all cackle at from stage and (small) screen: a hedonistic deadbeat-type who personifies a smoky dive bar on the edge of town. And like such a place, there’s long been an underlying bleakness to much of Attell’s subject matter. But his comedy remains unique for spinning the, how do you say? Tom Waits-iness of it all into elite absurdist amusement. On display is the mind of a man who commonly seeks debasement as distraction from, say, killing himself or punching out a vegan.

So when he laments being priced out of his dream of riding a dolphin, the affordable alternative he conjures – the so-called “poor man’s ‘ride a dolphin’" – paints a vivid picture of pathos and mutual degradation in the funniest terms imaginable: “bottle of Jager, baby pool, wet dog.” With Attell, of course, there has always been a gigantic assprint of blue across the black. “Every guy has done something gay,” he said, “like wrestling a dog 'til you come, or owning a cat. If you’re a grown man and own a cat, you’re either gay or a sorcerer.”

What audiences drank in over the weekend was easily one of the hottest tickets at Cap City all year (or how about all decade, for that matter?) Can it get measurably better than Dave Attell in a true club setting? Definitely not when he’s buying drinks to boot.

He is truly, as his old Comedy Central television show, Insomniac with Dave Attell, attests, the drinking man’s comic. Who else would buy cocktails for members of his audience in the middle of slaying them so thoroughly?

In many ways, Attell comes across like the common man, only his skill isn’t driving a Lyft or working under its hood; it’s on a stage getting huge laughs at an astonishing rate. Audiences expect this from artists of his class, but it still commands awe, particularly when the performance is from a comic notoriously devoid of flash or frills who simply delivers one superb and raw set after another. If you know his stand-up, or perhaps remember him best from Insomniac or as “The Ugly American” in the infancy of The Daily Show with Jon Stewart, it’s understood that Dave Attell doesn’t need mainstream approval or cool clothes to feel good about himself. For that, there’s whiskey and the neighborhood dog.