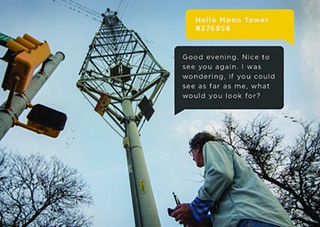 Ever wonder how that mailbox feels about having people stuff things in its mouth all day? Or how the hydrant likes being sprayed by every mutt that passes by? Well, now you can ask them. For the next two months, you'll be able to converse by text with all manner of objects on the street, courtesy of an ingenious public art project called Hello Lamp Post.

Developed by a team of designers with London-based PAN Studio, Hello Lamp Post uses individual reference codes that appear on objects throughout the urban environment – lamp posts, mailboxes, and hydrants, yes, but also parking meters, bridges, buildings, buses, fire trucks, trees, signs, moontowers, and more – as the equivalent of phone numbers for calling these things and "waking them up" for a quick chat. The conversation may begin with the object asking you a question – the designers wanted to convey the sense that these bits of the civic landscape were not just sentient but curious – and can develop over time from small talk about the weather and what's in the world around them to queries about your personal history and beliefs.

The project debuted in Bristol, England, in July 2013, and was enormously popular from the get-go: Almost 1,000 people sent nearly 2,300 text messages in the first week. By the time Hello Lamp Post concluded two months later, more than 25,000 texts had been sent. The project wound up winning the Watershed Playable City Award.

Now, Hello Lamp Post has jumped the pond, thanks to the City of Austin Cultural Arts Division as a way of marking the Art in Public Places program’s 30th anniversary. The project launches Thursday, Feb. 12, with a splashy party from 4-6pm, at Republic Square Park, 422 Guadalupe. In addition to announcing the phone number for texting your new inanimate friends, drinks and snacks will be available, and so will some of the PAN Studio masterminds behind Hello Lamp Post.

The project will continue through April 27, with various public events scheduled during its run. As an official art project of South by Southwest, it will be the focus of a SXSW event on Tuesday, March 17. Art Alliance Austin, a partner in the project, will also feature it at Art City Austin April 25 and 26. It's also a featured project of the 2015 Fusebox Festival, running April 1-12. Hello Lamp Post: Austin is sponsored in part by the Downtown Austin Alliance.

If you'd like a primer on HLP, here’s how to play: Step 1: Choose an item of street furniture with a unique reference code – a code can be a combination of numbers and letters, such as a serial number.

Step 2: Send a text message to the Hello Lamp Post phone number with a message in the format "Hello OBJECTTYPE #OBJECTCODE". For example: "Hello lamp post #402455" or "Hello moontower #BS2032."

Step 3: Follow the conversation – you should get a reply text soon. Answer the object’s questions and learn what other people have said. 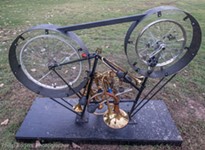