At Last, a Grammy for Conspirare

For a decade, they've been the Grammy-nominated choral ensemble Conspirare. Now, Craig Hella Johnson's company of voices can finally change that adjective to Grammy-winning. On Sunday, the group was honored with the award for Best Choral Performance for its recording The Sacred Spirit of Russia.

Any win would be welcome, of course, but this one was especially so, coming after the Austin-based professional choir had been five times a bridesmaid and never a bride. Despite the critical acclaim that greeted the previously nominated CDs – Requiem (2006), Tarik O'Regan: Threshold of Night (2008), and Company of Voices: Conspirare in Concert (2009) – none clicked with the voters enough to secure a prize.

But something in this program of Russian liturgical music from the late 19th and early 20th centuries did. The achievement is all the more impressive when you consider that Conspirare won out over recordings by the Nidaros Cathedral Choir of Norway, the BBC Symphony Chorus, and two ensembles that made Gramophone magazine's 2011 list of the 20 best choirs in the world: No. 11 Dunedin Consort from Scotland and No. 9 RIAS-Kammerchor from Germany.

Johnson was present to accept the award, which was presented during an afternoon ceremony, and took the stage with two of Conspirare's singers, basses Robert Harlan and Glenn Miller. In his speech, Johnson thanked the recording academy; "the very, very special musicians and souls that I get to work with, the folks who make up this group called Conspirare"; Robina Young and Brad Michel of the record label Harmonia Mundi; Russian sacred music scholar Vladimir Morosan, who consulted on the project; his partner Phillip, and "the beautiful community in Austin that surrounds and supports us," adding "we're so grateful to make music in that great city."

Johnson will headline a fundraiser for Conspirare this Saturday, Feb. 14. The company of voices next performs April 18, when it premieres How Little You Are, a work for choir and three guitar quartets commissioned from composer Nico Muhly. Performing with Conspirare will be the Los Angeles Guitar Quartet, Dublin Guitar Quartet, and Texas Guitar Quartet. For more information, visit www.conspirare.org. 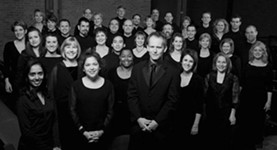 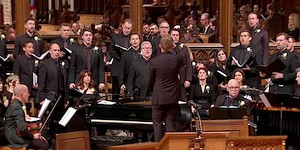