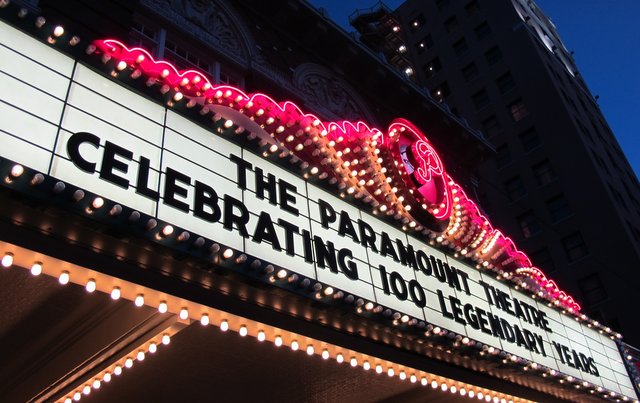 It was, Harry Houdini told the assembled supporters of the Paramount Theatre, a great pleasure to be back on its stage after a 99-year absence, to celebrate the centenary of Austin's greatest stage: an anniversary year that will see a calendar of free events and the return of both Lyle Lovett and a lost gem to the building.

After a medley built around "America, the Beautiful," courtesy of the Austin High Mighty Maroon marching band, Houdini – or at least history's great escapologist in holographic form – introduced the schedule for the storied venue's hundredth anniversary celebration. The sonne et lumiere fun and games were not without glitches but, "hey, if you don't experiment, you can't fail grandly," said Austin Theater Alliance CEO Jim Ritts.

The introduction gave a brief glimpse into the grand history of Austin's grandest stage. After all, the year after it opened, the state capital of Texas was so small that 20% of its population saw Houdini's show in its one-week run (for reference, now that would take a couple of sell-out home games at the UT Stadium). Ritts praised the foresight of Ernest Nalle, who built a 1,500-seat capacity venue only 30 years after the Capitol building was constructed, when there was barely a single paved street in the entire city. That said, it did have a streetcar. "Yes, we had mass transit in Austin. Vote Prop One," deadpanned Ritts.

The Paramount has outlived most of its contemporaries. "It's no mean feat for a theatre to be in its footprint for a hundred years without stopping," Ritts explained, noting that only 25 theatres out of the 1,000 or so that scattered early 20th century America have survived to equal that record. He had particular praise for Charles Eckerman, Stephen L. Scott, and John M. Bernadoni, as the three men who oversaw the 1975 renovation of the theatre, just as both the then-cinema and Downtown Austin were dying. "The Paramount became the anchor for the Downtown area," explained Bernadoni. They started by showing vintage movies "because we had to get people in the theatre. … As a result of that, tens of thousands of people came Downtown." That became the foundation for not just the theatre's renaissance, but also the rebirth of the center of the capital city.

New Mayor Steven Adler listed it along with Barton Springs and Town Lake as "one of the things that makes Austin special." Then came the proclamation, commemorating the 1915 opening of the Majestic (as it was then called) as a dedicated vaudeville house and the estimated 18 million customers who have seen live performances, silent movies, talkies, and now comedy, film festivals, and more.

Of course, there could not be an evening celebrating the legacy and cultural impact of the Paramount without a side trip to Tuna, Tex. Jaston Williams talked of sharing the stage with Cactus Pryor, Ann Richards, and Studs Terkel. "It doesn't get any better than that," he said. There was good news for those hoping for a reunion with his old friend and creative partner Joe Sears, with a promise that the pair are only on hiatus and far from done.

Now begins the year-long celebration of all that history and the laying of the foundations of the next century. The official birthday won't be until Oct. 11, but the Paramount staff are already revving up for a loaded year. Ritts said, "By December 31, we want everyone to go, 'Man, I'm glad the centenary's over, I'm tired of hearing about it.'"

That all begins on April 1 with a special free screening of A Night at the Opera, starring Paramount live veterans the Marx Brothers. On April 22, Ron White will open the Moontower Comedy Festival with a show open to all badge holders. The hot ticket will undoubtedly be the May 9 Centennial Gala with special performance by Lyle Lovett, including Patty Griffin as part of his amazing friends. Lovett along with Jerry Jeff Walker, will also get the honor of having their own plaques on the Paramount Avenue of the Stars.

The Marx Brothers aren't the only Paramount veterans getting a repeat screening. May 20 sees a free performance of The Philadelphia Story, celebrating Katharine Hepburn's appearance in the both the film and the play under the mural of St. Cecilia. More up to the moment will be an evening with filmmaker Robert Rodriguez, complete with a secret screening and Q&A, but all that may pale into insignificance with the restoration of an important part of Austin's architectural history. "In late September, we're going to hold one hell of a party here," said Ritts, with one special candle being lit: a reconstruction of the original Paramount Theater sign, a blade with a distinctive sunburst design and over 1,000 bulbs.

Bernadoni summed up the sentiment of the evening, and the year to come, simply. "This is not a building of plaster and steel. This is a living being, and she is wonderful."