To Join Or Not to Join

Austin actors tell how they negotiate the Actors Equity choice When local actors talk about pay – which is often – you can count on the conversation turning at some point to the union and whether or not joining it is a good thing. It's a debate that's been going on a long time, and one that's touched on briefly in our Cost of Art installment on actors' pay in Austin. But there's more to say.

Kenneth Wayne Bradley, a mainstay of Austin stages who works steadily in film as well, recently made the decision to join AEA. Part of the reason, surprisingly, was our lousy traffic: Bradley lives in Leander, and his commute time into Austin has doubled. After factoring in “the time that I’m off the grid and unavailable for film and commercial work, it just made good financial sense to go Equity.” It was a tough decision given his affection for “the smaller independent theatre companies here in Austin. Those companies define the Austin theatre scene for me.”

She adds that, “performing in the theatre – especially as a lead in a large-scale musical like The King and I – takes a tremendous amount of time, work, and discipline. There is a lot of time away from my family, and I feel like an athlete having to be in tip-top shape to sing and perform a 3-hour show at that level seven times a week. It is a lot of pressure when you feel like a lot of the show’s success rides on your shoulders. There is no way I could do that and ask that of my family without being compensated for my time.”

Aaron Alexander, a stage and film actor and one of the few who makes a living at it, is not AEA. “I assume living in places like New York and L.A., it would hinder my career if I didn’t become Equity or SAG, but in Austin it truly isn’t a requirement.”

AEA actor Ben Wolfe believes the decision comes down to “what you want to do. Do you want to play with experimental theatre? Maximize your experiences and your exposure? Then probably not. If, however, you’re willing to accept the occasional limitations on what you’re able to do and who you can work with, if you understand that there will be times when you accept a role simply because you want the work even if the role isn’t what you were hoping for, then absolutely, go for it.” 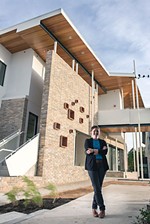 Bringers of Joy
20,000 Austin kids are happily learning to make positive changes in their lives through Creative Action