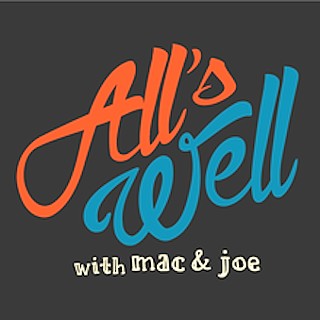 Matt Bearden has been running the Tuesday night PUNCH! showcase of stand-up comedy at Cap City Comedy Club for years. But not any more.

Ah, yeah, PUNCH! You might have seen the show listed in the pages of your Austin Chronicle every now and again, but most weeks we wouldn't even bother: The damned thing was usually sold out way in advance.

Tuesday nights are typically the slowest nights everywhere, of course, and so what else was there to do in town, really, right? But, no, see: The way Bearden was running the show, the line-up of comics he was booking, and the very Bearden-ness of his own stand-up self … PUNCH! would've been a draw anytime.

(Imagine: Some roiling, godforsaken hybrid of SXSW, ACL, and Fun Fun Fun Fest all at once? Fuck it: Go to PUNCH! instead.)

But now all of that's over.

The answer, in this case, is Mac and Joe.
Mac Blake and Joe Hafkey, to be specific.

They're the hosts of the new show called All's Well, starting on Tuesday, Jan. 13, at Cap City Comedy Club.

Blake, you probably know, reigned as the Funniest Person In Austin in 2013. Hafkey, you might also be aware, has yet to achieve that vaunted status. Both of them are very funny men, and when they're working together? Comedy gold, ladies and gentlemen. Laugh-your-ass-off comedy gold.

Evidence: Blake and Hafkey's occasional showcase of comedy at Spider House Ballroom: Jazz Cigarette, a consistently popular presentation of their comic talents and the talents of their stand-up friends.

Evidence: When you've got to replace Bearden, who's abdicating his position for reasons rendered cryptic only by his lack of coherent response at press time, you're not gonna reach for the chopped liver.

So we spoke with the two new hostly honchos recently, to get some idea about how this presto-change-o happened and what we can expect from the new All's Well show in the year – years? – to come …

Brenner: Why you guys in particular? Bearden's stepping down, and y'all are the comics coming in to take his place as host?

Hafkey: Well, it should first be said that every "showcase" style show in Austin owes a nod to Bearden. PUNCH! was the first, and it showed everyone how to run a fun, successful show. In fact, when we started Jazz Cigarette, Bearden was quick to offer some really generous and helpful advice on how to make a great show. I think that a big part of the answer to the question "Why us?" is because Bearden saw how we took his advice, coupled it with a lot of stuff we learned on our own, and turned Jazz Cigarette into what it is now – and that made him feel comfortable handing the reins over to us with All's Well.

Brenner: Did Bearden choose you? Or was that someone else's decision?

Hafkey: Cap City was definitely involved in the decision.

Blake: Yeah, we don’t know the exact timeline of things, but we know that Matt was into it and so was Cap.

Hafkey: It will definitely have its differences, but it's safe to say that anyone who enjoyed our mojo at Jazz Cigarette is going to have a great time at All's Well.

Blake: We’re still going to bring that patented Joe & Mac banter to this. We were a little more experimental with the format in our last show. All’s Well is going to be purely the best stand-up comedy show we can put together. And the front room at Cap is such a fun room to do a show.

Brenner: And what about that Jazz Cigarette? Y'all gonna keep doing that in addition to All's Well?

Hafkey: Jazz Cigarette isn't going anywhere. Mac and I are going to continue producing that show, but we've handed off hosting duties to two of our most trusted and hilarious scamps, Danny Palumbo and Aaron Brooks. Both have guest-hosted on multiple occasions when one of us has been kept from the show, and they're going to be great.

Blake: Aaron and Danny have a dynamic that’s unique to them. I can’t wait to see what they do with the show.