Glazer and Jacobson take their Comedy Central series on tour 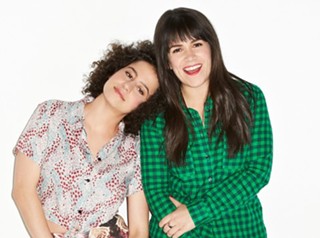 Broad City, on Comedy Central, has caught on for a reason – make that reasons: the well­-written scripts; the outrageous yet believable scenarios that friends ­­Abbi and Ilana get themselves into; and the many other characters that add to Broad City's lol­worthy world.

Created by and starring Abbi Jacobson and Ilana Glazer, who struck up a friendship while performing together at Upright Citizens Brigade, Broad City began as a web series in 2009. Upon having the multi­talented Amy Poehler guest in the web series finale, Jacobson and Glazer asked Poehler if she would executive produce the show after Comedy Central signed off on it. She said yes, on January 22, 2014, Broad City debuted on TV screens across the country.

The show concluded its 10-episode first season in March, but Comedy Central was happy enough with it to renew the series, which returns in January of 2015. Since wrapping production on Season 2, Jacobson and Glazer have been taking the show on the road. Their Broad City Live tour passed through Austin earlier this week, giving the Chronicle a chance to ask the duo about the tour, how they met, and what's coming up on Broad City the series.

Austin Chronicle: How does it feel to be on the road for the Broad City Live tour?

Abbi Jacobson: It's been really fun. I haven't been to a lot of the states we've been going to, and it's just perfect timing for us. We just wrapped up the second season editing, and it starts in January, and it's just a really good time to meet some of the fans and do a more personal kind of show.

Ilana Glazer: It's been so wild. Getting to meet our fans, it's just nuts. Every time we travel out of New York together for Broad City, we're always dumbfounded that people know us in other cities. It's just really hard to grasp, but it's easier seeing people's faces and being like, "Oh I can see this type of person." And it's not always the same type of person. We're lucky enough to have a really wide range of fans.

AC: What has been the most interesting gift you have received on tour so far? I saw on your Instagram that someone gave you a blunt in a Smarties candy wrapper.

Glazer: [Laughs] Just a little joint. If it were a blunt, I don't know what kind of wrapper it would be. [Laughs]

Jacobson: What about that uterus thing we got?

Glazer: We also got this felt uterus that this person made, their own nature's pocket. And somebody else made a plushy bagel and gave us a bag of garbage bagels.

AC: Do you feel you have to readjust to touring since the Broad City TV show has been the focus recently?

Jacobson: Definitely, it's a totally different thing and version from the show. Broad City Live we've been doing at the Upright Citizens Brigade for a few years, and it's much more Ilana and I in real life. It's like you're hanging out with us rather than the TV version.

Glazer: People come to the show not knowing what to expect and rightfully so, and each show and each audience makes the performance unique. I don't know what I would expect if I were a viewer. It's very much its own thing, just like the web series was and just like the TV series.

AC: Where did the concept of Broad City Live come from?

Jacobson: I think it sort of came naturally from us performing at the Upright Citizens Brigade, which fits like 200 people tops, with no standing. It's in a basement theatre, and when you perform there it's automatically interactive, so that's just how were used to doing this kind of show. And then it kind of just grew out of that.

AC: What was it like when you two first met each other?

Jacobson: We were both taking classes at the UCB, and we were on a practice group together for a few years just performing with them and just being friends. [Ilana and I] were very quick friends ­­ we were the only two girls on the team. But I think the dynamic grew as we were performing with this team, which was called Secret Promise Circle. Once we started making the Broad City web series, I think the dynamic began to amplify a little bit. But it was definitely there in the beginning.

Glazer: We've been trying to remember our relationship before Broad City, and it's so hard to remember. When we met, we clicked on things we had in common, things we didn't have in common. But there was the this general feeling of being down to hustle, but we didn't have something to channel that into until Broad City.

AC: What has been the motivation in bringing on people to Broad City from the UCB, and what has been some of the most valuable lessons in still maintaining a relationship with the people within the community, and the community itself?

Glazer: The community always supported us. Whether that be individuals helping us make the Broad City web series or people just liking and retweeting and emotionally supporting the project. But also, it's not like ­­the community is full of this talent that's like a secret weapon. We're lucky enough to know people before they become stars. It's really beneficial for Broad City to have these people from the UCB or surrounding communities. There's so much raw talent in New York.

AC: The transition from web series to TV. Do you feel you have a better understanding of TV since working on the Broad City TV show?

Jacobson: Yeah. We did two seasons of the web series, and even when we started the second season of that we felt like it was elevated, and TV shows are the same kind of progression. I think we're learning a lot with each season, and I hope that we get to do more and learn more and get better and better. But I'm very happy with how the second season came out, and I'm very excited to put it out there because it feels like a natural extension, but also a natural progression from the first season.

AC: Looking back on the first season, do you have a favorite episode or favorite moment?

Glazer: It's hard to choose because they're all like our children in a way. I feel like the first season started growing in the middle, like moving towards the second season. I really loved the finale, I think it's so simple, and Amy Poehler directed it and she did a great job on that. I loved "Working Girls," the third episode, which Lucia Aniello directed. It's so hard to choose. I love them all!

AC: As someone with a veneer that occasionally pops out I have to know: Ilana, do you have a real veneer, and if so, why?

Glazer: So I don't have a veneer, and I don't remember what order it came up in ­­ whether it was Amy [Poehler] telling us first or her being like, "That happened to me." But that happened to her one Saturday afternoon while she was working at Saturday Night Live, during a dress rehearsal. She had a veneer on live TV, and on SNL she was on every single sketch, you know? Can you believe that? Just the situation, if you've ever been there, it's really stressful.

AC: What are you looking forward to people seeing in the second season that wasn't present in the first season?

Glazer: I think we show a little bit more of the exterior characters. You see everybody from the first season again in the second season, but we take them a little further storyline-wise. You get to see more of New York and other different places. You meet Ilana's family; you go deeper into Abbi's goals and desires. The second season is us rooting ourselves in this world.

AC: One of the notable guests that will be appearing on the show is Seth Rogen. How was it working with him?

Glazer: It was really great. He's one of those people where you meet him and you're like, "I went with you to camp or something," or "You're like my cousin."

Jacobson: He was down to do whatever. He's in the first episode.

Glazer: It's so good. It's such a good cameo. 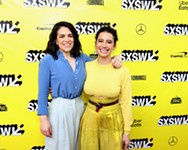 Broad City Series Finale
If you’re here for spoilers, queen, we’ve got some news for you 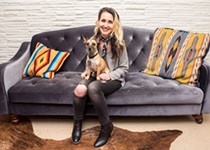