Hey – Are You White?

And what, if anything, do you intend to do about it? 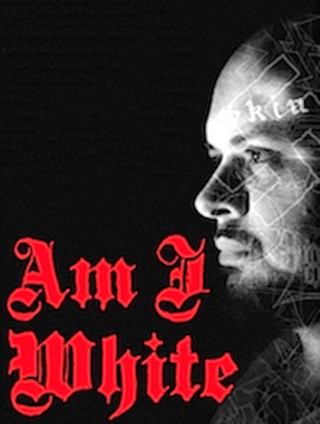 Black may be beautiful, but here's a somewhat paler man who's been involved with the uglier parts of the White Power movement. His name is Wesley Connor and he's the main character in a new drama called Am I White by Austin playwright Adrienne Dawes. And this Connor guy is based on a real, actual person: A man named Leo Felton.

Note: The real guy, Felton, is in prison (not for the first time) as of this writing, sent up for armed robbery and allegations of planning to bomb the Holocaust Museum, and will likely remain there for a couple dozen years or more.

Thing is, this White Power guy, he's … well, he's actually of mixed race himself. And this fact was publicized during news coverage of his indictment. And so, back in the harsh black-and-white world of the lock-up, things are now a bit more let's say problematic for him on a day-to-day basis. Not to mention what might be going on inside the man's own skull: How does he square all this cognitively dissonant bullshit away?

"I found out about this guy in college, in my senior year," says Dawes. "I was reading an article in Maven magazine, and was just fascinated. He has a really complicated relationship to race. He went into prison the first time, and he wasn't particularly racist at all. He was a skinhead, but not a racist skinhead – he was the kind that would beat up the racist skinheads. But he had his head shaved, he could pass as white, and when he went to prison, the people in there that he knew were racist skinheads, the kind he usually fought with. And it was just easier to go with what everyone assumed. And as the years went by, he got more indoctrinated into the White Power movement, and he became one of its leaders. He loved the discipline, and it appealed to him intellectually."

It appealed to him intellectually?

"This guy is a real smart guy," says Dawes, who's corresponded with Felton, "he's a member of Mensa."

But now, in the story's present, back in prison, outed as other than some pureblood ideal and trying to resolve his own issues of identity … no offense, BuzzFeed, but maybe we will believe what happens next. Certainly, the playwright's crafted an intense, hour-long exploration of the situation, possibly influenced by her own racial origins.

(What does that mean? See this excellent interview with Dawes, by the Statesman's Jeanne Claire van Ryzin.)

And certainly, director Jenny Larson of Salvage Vanguard Theater has arranged the staged narrative, this world premiere presentation of it, to capture that intensity.

"It is tense," says Larson. "But it's also fun and fast-paced. Well, fun might not be the right word – but there are laugh lines. The world shifts and shifts and shifts again, so you're kept on your toes. It runs a cool hour, so you walk away feeling like you've been on some kind of rollercoaster ride … There are some scenes that are quite difficult in terms of material, and in some rehearsals we'd just have to laugh to relieve the pressure and tension that the content creates."

And then there's Ben Wolfe, who's taken on the role of Wesley Connor. As the show heads into its first weekend – including a VIP gala this Saturday night – we asked the acclaimed local actor what it's been like embodying such a man.

"It's been quite a ride," says Wolfe. "How do you take a neo-Nazi and make an audience empathize with him in a 65-minute show? Adrienne's piece is fully charged, full of piss 'n' vinegar, love and loss, heartache and hope. The hope part may be debatable, because it is a dark piece and a dark character, but we really pushed to find those moments of lightness to let the audience breathe a little before turning the corner again. Jenny and Adrienne have been fully supportive and nurturing in allowing me to explore the various facets of this character while we massage away the excesses to get where we are with him now. Do I find myself scowling at the ground after a rehearsal or performance, left with a bit of a dark cloud over my head? Yes. But this cast … my god, this cast, they're all amazing."

Yeah, we see what he means.