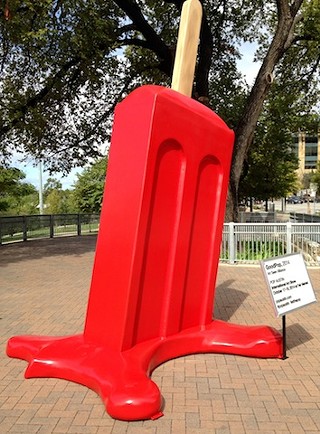 Melting on a street corner near you... (Photo by Robert Faires)

After midnight Wednesday, when you were no doubt snug under the covers safe from that frog-strangler of a storm, Matt Randall was out in the thick of it, getting drenched while he and a handful of other hardy souls installed a 15-foot Popsicle on the north end of the Congress Avenue Bridge. All in the name of art.

That's one heavy-duty commitment to art, eh? But when you're also committed to launching a three-day interactive art showcase the likes of which our city hasn't really seen before – an art showcase that will be bringing in 100-150 works from around the world, by artists as renowned as Andy Warhol, Takashi Murakami, Shepard Fairey, Mr. Brainwash, the Gao Brothers, and Gérard Rancinan – you're not likely to be deterred by a downpour.

The event is called POP Austin and is set for Oct. 17-19 at Fair Market, the new events center risen from the ashes of the TOPS Furniture Warehouse on East Fifth. Work will be exhibited from Friday night through Sunday night, with a half-dozen half-hour TED-Talk-like POP Talks about contemporary art spread throughout each day. POP Austin has the art collector in mind, but it's a different kind of show hoping to attract a different kind of collector. Randall and his three partners-in-crime for the venture – Lana Carlson, curator; Amanda Huras, director of brand; and Steve Carlson, creative director – have their eye on all those young professionals who have done well and could be drawn to purchase art for themselves. "The art market nationwide is having a difficult time capturing that audience," says Randall, "so how do we flip the model and not just be disruptive but enhance and add to the visual arts market in Austin?" In the minds of POP Austin's founders, it would involve changing the model of the art fair established by Art Basel in the Seventies and largely unchanged since. They chose this city because of its unique culture and innovative spirit. "If anything can be done differently, it's in Austin that it can be done differently," Randall says.

In seeking that different direction, Randall asked curator Carlson how they could get dealers and collectors to come together and show art by the biggest names that they wanted to sell and also work with some artists directly. She told him that no one does shows in which everyone comes together. He asked, "Why not?" and she replied, "Because no one's ever done it." Then we're gonna do it, he replied. "I've been in software, where you find successes in disruption, and maybe that's kind of a harsh word, but why not change things? An art fair is just a trade show – you sell a lot of booth space, and every gallery has its own space. Take away that business model. Take a museum exhibition, which has a lot of different artists in it; take a gallery; and take an art fair, and slam 'em all together, and this is what POP Austin is."

Because he wanted Pop Austin to be different than any other kind of art show that had been presented in town and wanted to target that different audience, Randall wanted the marketing for the show to be different as well. It was the creative firm Preacher that proposed the idea of an art installation – make that five art installations that would pop up around the city in the weeks prior to the show. "The target market that we're going after, it's all about interactive – standing in front of things, getting pictures taken, Instagramming it, video. This is how things are spread now," says Randall. "The thing is, how do we have fun with this? That's our biggest thing. Instead of the traditional [experience] that everyone's used to – walking into a gallery and standing and looking at a piece and then going to the next one – how do we make this interesting and fun, so everyone wants to get around it. It's not necessarily about selling art. It's about creating this buzz and educating people so they say, 'I never thought about collecting art, but now I will.'"

POP Austin then commissioned local artists to create the works, which will be unveiled every few days over the next two weeks. "Every one of them has an Austin tie; they're either created by an Austin artist or it's a mural about something in Austin – things of that sort. I think people will be amazed at where some of these murals are going," says Randall. "'They allowed them to do that?'" The first was this 15-foot, 700-lb. cherry-red Popsicle, created by Art Seen Alliance out of a metal frame, foam, and truck bed lining, covered by five coats of glossy boat paint.

The idea was to place the piece in the dead of night, so that commuters, tourists, and Hike & Bike Trail runners would be surprised by it as they passed the corner of Congress and Cesar Chavez first thing Thursday morning. Randall and a six-person crew had been watching the radar all night to see if it would be storming after midnight, and they thought they were in the clear, quite literally. "And then literally at 11:30, this storm started over by San Antonio, came out of nowhere," says Randall. "We got here about 1, 1:30, and the skies opened up on us. And we were like, 'Well, we're wet. Let's go on.'" Of course, the entire installation was recorded by a video crew, so there will be a record of the Popsicle's installation in the driving rain.

Right now, though – as in between 5pm and 7pm Friday the 19th – Randall and the POP Austinites are handing out real Popsicles at the giant faux Popsicle Downtown, courtesy of the good folks at GoodPop.

More info on those other installations as they roll out.

POP Austin will hold its VIP Opening Party Friday, Oct. 17, 7-11pm, then will be open to the public Saturday and Sunday, Oct. 18 & 19, 10am-8pm. For tickets and information, visit www.popaustin.com. 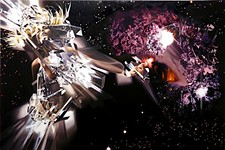 Experiential House of L Brings Global Style and International Glamor to SXSW
Art, style, music, and more is very on-brand with the fest 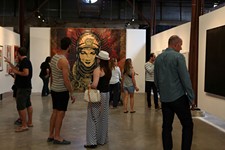 November Is Austin Art Month
With EAST, POP Austin, and the Creek Show, who's to argue?