Still the Fading Stains of Some Bad Improv Blood

Because: You have Five Families, you're gonna have some dysfunction. 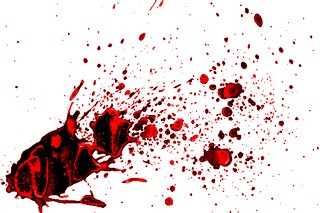 Listen: We're not going to get into it here, really.

No sense stirring up old shit in the community, especially not for the sake of generating meager clickbait, especially not when there's so much interesting positive stuff to report on and we don't have time and room enough for all of that, even.

But let's make sure we at least acknowledge the existence of other-than-paradise, however briefly, right? Whether it's the years-old ColdTowne schism that led to the formation of The New Movement, or maybe the near-legendary ruins left over from the Big Stinkin' Comedy Festival of more ancient times, or whateverthehell, OK?

Let's note that, in the recent roundtable talk with representatives from the Five Families of Austin Improv, some "bad blood" was at least obliquely mentioned in conversation. The more diverse bulk of that invigorating coffeeshop palaver is featured in our current print edition and online right here … so, right now, here in the midst of the 13th annual Out Of Bounds Comedy Festival, let's just glance at an out-take from that discussion, at what those Hideout, ColdTowne, New Movement, Institution Theater, Merlin Works, and OOB people had to say about this … bad blood:

Kareem Badr: It takes a while – and some people don’t get there – to get to the point where you realize that someone else’s success does not impact yours in any way. That it has nothing to do with you – it’s an independent phenomenon – and you shouldn’t think that, for you to succeed, that means everyone else has to fail. If we think we’re actually competing, as theatres, for the same fifty people to sit in our seats, we’re all assholes.

Michael Jastroch: I think part of it – and this is my experience, from when I first started doing improv – you find something that really inspires you, and you feel a need to defend it.

Michael Foulk: Even if it doesn’t need defending, sometimes.

Asaf Ronen: How strange to be passionate in all the emotions. “Why don’t you just keep your passion to your art?” No – it’s gonna bleed over.

Jastroch: And as the different theaters branch out stylistically, there’s a thing with younger performers, sometimes – and I don’t mean age, I mean people who haven’t been doing it for as long – to get like “My tribe is the best and the only way to do this.” So rather than have a conversation, they’re gonna get angry about it.

Foulk: Well, it’s a transition. It’s about adjusting things and sifting through that old stuff, the bad blood that is real to people, and letting those things die or change. It’s just a process.

Ronen: To quote Jill Bernard, who’s been to Austin many times: “We’re all each, ultimately, our own school of improv.” And you add to your toolbox whatever you can, from whatever influences you find. And we’ve added to each other’s toolboxes from watching each other. I think that’s the great thing about Austin: We’ve raised the bar for each other. It’s like, “Oh, look what they did at this theatre.” I’ve walked away from shows at the Hideout or ColdTowne, and I’ve made notes of Things To Think About for the next time I put up a show.