Before 'Tuna,' he rode with 'Maid Marian in a Stolen Car'

Jaston Williams has stories like West Texas has sand – a vast, seemingly inexhaustible supply that swirls up around you whenever you're near. Consider: This notable actor/writer has already produced three shows of richly embroidered, raucously funny yarns and this week opens a fourth. Maid Marian in a Stolen Car, at Zach Theatre.

Lord knows we've loved hearing this co-creator and co-star of Greater Tuna and its sequels chart his life in the Panhandle and the outrageous, amazing characters – many of them from his own family – that he encountered out in this hostile world where, as he says, "there's an amazing vein of humor that seems to run on one side of the highway, and the violence is running on the other, and you never know when they're gonna cross." And hearing that another chapter in that saga was being rolled out was all the excuse we needed to venture back into the vicinity of Williams' whirlwind of stories and see what hilarity would be kicked up.

Still, we wondered, after all the narratives he'd dished up in Cowboy Noises, I'm Not Lying, and Blame It on Valentine, Texas – not to mention his ongoing story-swap with Joe Ely, Jo Carol Pierce, Jimmie Dale Gilmore, and Kimmie Rhodes in Is There Life After Lubbock? – where did the stories in this new show come from? Had he been saving them up for some reason? How did they come to be in this show?

Needless to say, in answering these questions, Williams spun quite the story.

"Actually, [this show] got built around the piece I wrote several years ago," says Williams. "My first professional job was in San Antonio at the First Repertory Company in a production of Hamlet, which is a very intimidating way to start. You know. 'Could we not start with Come Blow Your Horn?'" [laughs]

"Anyway, I played Osric, you know, the little evil one who makes sure the poison's all in the right places. But I wrote this piece called 'Hamlet con Queso,' because our company had schools come see the performances early in the morning. We were doing Hamlet at 9am. Yeah. God! That's what we all said. [laughs] We had performed for Alamo Heights High School, which, you know, is affluence on steroids. You know, they called 'em Almost All Whites. [laughs] Our director wanted to do it in modern dress, and he said, 'I just want you to pull stuff from your own closets. Pull stuff that you think you would wear.' And I always said, those Alamo Heights kids are looking at each other, goin', 'Damn! Denmark was such a poor country. Did you see those shoes? I was so sad. Where do we send stuff?'

"Anyway, after performing for Alamo Heights, we ended up performing for Fox Tech High School and Lanier High School, and somebody booking it did not realize that these two schools were blood rivals. They were almost entirely Hispanic populations, and they had an annual football game that would draw 20-25,000 people. They called it the Chili Bowl, and you can look it up; they still celebrate event, the alumni do. These were rival Hispanic schools from pretty poor neighborhoods, and we got them for a 9am performance of Hamlet, and it changed our lives. It changed every perception we had ever had about doing theatre. It was a life-changing experience.

"I've never performed a play – certainly not a Shakespeare – where an audience got it more. It was like performing for the groundlings. And it was absolutely transformative. At the beginning of the day, our Polonius was hiding in the dressing room,screaming, "Jesus God!" [laughs] It was unlike anything I'd ever been through. This audience, they summed you up when you came on. They decided whether you were a villain or a hero or a faggot, you know. They just came out with it. That's just how they summed it up. Osric had a big ostrich plume and a silk hat, so they were really down on me. But it turned into one of the most amazing performances I'd been through. By the end of it, we were rock stars. They totally embraced us. They rushed the stage, and we understood something about the work we were doing. You know, we were the enlightened, liberal – very liberal – actors, talking about the perils of the world and this and that, and then we got in front of an audience that knew what that was. They really understood it. They understood what it was like to die in a knife fight. They understood that kind of betrayal.

"That's how it started. I wrote that piece years ago, you know, just to write it, and Scott Kanoff [director of Williams' previous solo shows] fell in love with it, and we talked about putting it in other shows and it just never was right. It just wasn't going with what I was working on in I'm Not Lying or Cowboy Noises or Valentine, Texas, or any of that. But I always kept it, and I always loved it. I always thought that it was something that deserved retelling.

"And then I started to feel this need, now that Tuna is over and that's done, [to] reflect, you know, and really look back on it. And I really wanted to write about how Joe [Sears] and I established this amazing, splendid friendship over a 10-year period in San Antonio, where we were just hungry actors who spoke the same language and understood the same culture, and if one of told a joke or told a story, the other always got it, and that we were actually creating Tuna years before we knew we were creating Tuna. You know, this whole wealth of experience and storytelling – he would come back from Christmas and talk about his crazy cousin who ran the cafeteria in a small-town mental hospital. [laughs] In Oklahoma. [laughs] You know, one of those places where the staff needs a badge so you know not to keep 'em. 'Let her out! She works here!' [laughs] And I would come back with stories – God! – about my mama. My mama loved her animals, loved her pets – oh, she loved her dogs. but she was the death of 'em. She'd accidentally back her car over them coming out of the driveway. She had two, she called them Tom and Jerry. I called 'em Pol Pot and Idi Amin.

"Anyway, Joe and I would walk to San Pedro Park in San Antonio. It's the oldest state park in Texas, and it's this wonderful old park full of oak trees. And one of these oak trees in particular, the branches were so wide, they were just wide as a coffee table, and they came right down onto the ground, and you could walk up into them. And Joe and I would just walk up into them and find a seat on a limb and, as I say in the play, 'participate in behavior now totally legal in Washington State and Colorado,' and we didn't realize it, but we were creating the show. We were creating the show. But what it really was was just a friendship, and all of the rest of it came from that in that two people who instinctively understood each other would meet in, of all places, San Antonio, Texas. I talk later, I say, 'You know, we didn't go to Julliard. We didn't go to the Royal Academy. We went up into a tree. We went up into a tree, and we loved Shakespeare as much as anybody who ever went to the Royal Academy.'

"Another section of the show, the 'Maid Marian' section, is about going to Taos, New Mexico, in the 1970s to do theatre. CK McFarland, Marco Perella, and some of the craziest people I've ever met. Bill Clinton had to pardon some of these people down the line. I mean, it was a vibrant group. [laughs] It was not just your general eccentrics, let's just put it that way. Someone suggested group therapy to me one time. I said, 'Why the hell would I go to group therapy? I'm in show business. I deal with neurotic personalities onstage. Why would I seek out strangers in the same condition with less flair?' I'm sure if I went to group therapy, I would say, 'Is that all you've got?' [laughs] 'Can I pick my group next time?' [laughs] In that section of the play, we went up there to do a melodrama about Robin Hood, and it was just one of those crazy and wonderful and most vibrant times in your young theatrical life, you know, that age when you all somehow did it and you all somehow fed each other and you somehow got gas money and you somehow made it happen. It was just that beautiful … you know, when you're young and you can put up with that [laughs] before it ceases to be charming and takes you into the depths of manic depression.

"So the second act deals with all of that, and I [also] felt a real need, having had a life in the theatre – we only see the people onstage, but it's the behind-the-scenes people that make us look right, that make the lights happen, that run the tables and clean the costumes and tape the mustaches and put up with actors. And something else I found out: Actors, we're unstable to begin with, but the technicians get to see us at our worst. You know, take people who are half-baked to begin with, then put 'em under a lot of pressure, and then let these poor people try to work with them. My god!" 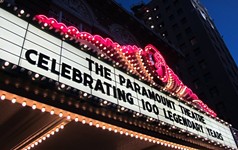 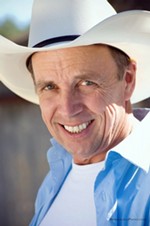