Five Families in One Performance Troupe? 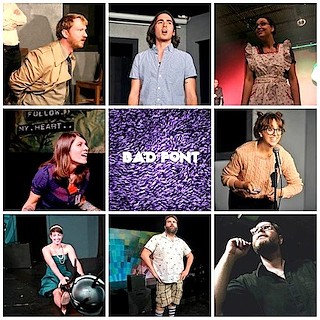 Five Families, yeah – with initial caps on those words, please.

Because we're talking about the five different schools of improvisational performance – improv comedy, mostly, sure, but that's not all – here in Austin, Texas. And the people in charge of those schools, those performance venues, refer to themselves only half-jokingly as The Five Families.

We've got an article coming up in our next print edition (and it'll be here online, too, of course) about how those Five Families interact, about what makes their relationships stand out in the national improv scene. But this piece right here … well, Thursday's print feature won't be anywhere near the size of Galactus, but this post is sort of like the Silver Surfer: Functioning as a herald for what's to come.

And it's about Bad Font.
So it's also a herald about a Harold.

We recently instigated a roundtable discussion with representatives of the Five Families, a discussion since edited and sized to fit the paper-based Chronicle, and one of the things that wound up on the discussion-transcript's cutting-room floor was mention of a troupe called Bad Font. We were talking about the crossover of performers among the various schools and venues, and Shana Merlin of MerlinWorks said, "Yeah, there was a troupe called Bad Font, and they had someone from every school in town. It was kind of their thing."

And Asaf Ronen said, "Yeah, Scott Hearne started that – and it was done intentionally."

And Brenner said, "And how are they doing?"

And Jeremy Sweetlamb said, "They broke up."

And everybody laughed, because OOB producer Sweetlamb was just bullshitting for comedic effect. Because Bad Font, that panscholastic salmagundi of an improv troupe, is in fact still together – and performing tonight (the opening night of the 13th annual Out Of Bounds Comedy Festival, no less) at the Hideout.

And so now here's an interview with the aforementioned Scott Hearne, about the whys and wherefores of the group:

Hearne: Bad Font was named by Justin Davidson because it was simple and evoked humor. It could be a commentary on Comic Sans or a fountain of ill. We go pretty dark in our improv, so it's fitting.

Brenner: Why members from all Five Families?

Hearne: It was important to me to have different philosophies of improv present on the team. I needed improvisers who were great dramatic, emotional players and other improvisers who could play the "game" of the scene very well with an eye toward comedy. Austin is blessed with five improv theaters and each of them focus on different elements of improvisational theater. I could find great game players at the New Movement and Coldtowne, dramatic performers from the Hideout and MerlinWorks, and great character improvisers from the Institution Theater.

Brenner: Is it at all problematic or maybe challenging for imps from so many different schools to mesh their skills and styles?

Hearne: Yes, it can be challenging. Our first year of existence was spent in rehearsal, piecing together the elements of the Harold format and negotiating improv terminology. Improv as an art form uses a lot of different terms for the same thing. For example, in improv scenework, many times the "game" of the scene is interchangeable with "relationship".

Brenner: Ah, the Harold. Why do you work in that format in particular?

Hearne: Austin's improv scene doesn't feature the Harold. Short-form, narrative, and montage dominate the landscape here. In Los Angeles, Chicago, and New York, most improvisers interested in long-form all audition to be in-house Harold teams at the Peoples Improv Theater, Upright Citizens Brigade, and iO. I wondered why, in the major entertainment centers, was Harold considered the height of long-form improv? Was it a left-over relic or fetish from the idolization of Del Close? Or did the form have merit? I now believe that studying Harold is finishing school for the long-form improviser. You can focus on narrative, game, listening, and team all within the study of Harold. It has a lot of utility and forces you to be an unselfish improviser to find success.

Brenner: And what about after Out Of Bounds ~ do y'all have plans to keep performing as Bad Font?

Hearne: We plan to keep performing. After OOB, we're playing at Coldtowne on Harold Night on September 9th – all improv teams perform the Harold for that show – and at the Institution Theater, with iScream Sandwich (another Harold team) on October 17th.

Brenner: And tonight you're in the OOB.

Hearne: Tonight we're in the OOB.