The student Shakespeareans have departed, but the Bard they celebrate is sticking around. Old Will's taken up residence on a wall inside the barn, on a shiny new plaque from the Shakespeare Birthplace Trust – a gift during a summer that saw Shakespeare at Winedale's prestige rise even as concerns grew over the historic property's decline. 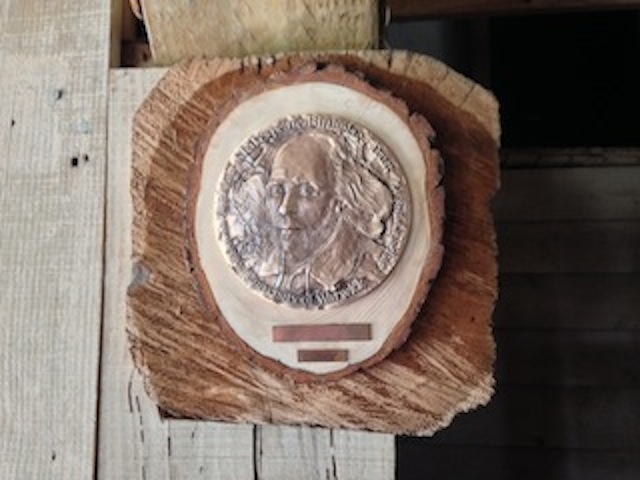 This was the 44th consecutive year that Shakespeare's work has been performed in the old hay barn at the Winedale Historical Center – a run begun by Dr. James Ayres at the behest of Miss Ima Hogg, the legendary philanthropist who donated the 225 acres and its restored 19th-century homes and barns to the University of Texas in the mid-Sixties. In the barn's bare clay floor and wooden loft, she saw the reflection of an Elizabethan stage and encouraged Ayres to stage Shakespeare there. So he did, and for 30 years brought university students out to this rural community between Brenham and La Grange to explore the Bard's mastery of drama and language through performance. That approach – learning Shakespeare from the stage instead of analyzing him on the page – was considered novel during the program's early years, especially since the students in Ayres' class weren't drama majors who knew their way around a theatre but majors in engineering, English, economics, philosophy, pre-med, business, and law who typically had no stage experience at all. But the results were so powerful and so life-changing for many of the students who took part (including this writer, summers '78 and '80) that eventually academia and the realm of Shakespeare scholarship came to acknowledge the incomparable value of Shakespeare at Winedale. 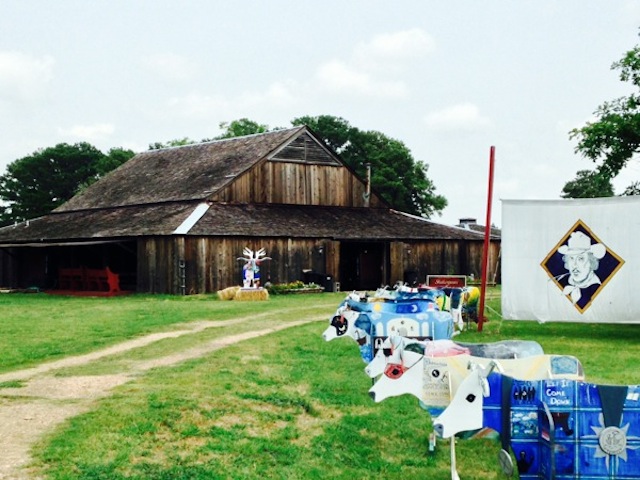 The most recent proof of that came through a double-shot of extraordinary recognition this summer. First came the visit from the Shakespeare Birthplace Trust, the Stratford-upon-Avon-based institution that maintains the homes associated with the playwright during his lifetime and holds the world's largest museum and archive of Shakespeareana open to the public. Representatives of the Trust are commemorating the 450th anniversary of the Bard's birth with a summer-long road trip across North America to visit and honor Shakespeare festivals on this side of the pond, where there's more Shakespeare being produced than anywhere on Earth, according to Dr. Paul Prescott, Reader in English at the University of Warwick and one of the Trust travelers. Of the 14 stops that Prescott and Dr. Paul Edmondson, Head of Research & Knowledge for the Trust, are making, only one is for an educational program, and that's Shakespeare at Winedale. The two Pauls (Is one from Ephesus and one from Syracuse?) arrived in Central Texas just 10 days into their journey, with only stops in Kansas City, Mo., and New Orleans behind them, but they were quickly swept up in the uncommon energy of the place, of the communal investment that the students make in the plays and their energy and willingness to risk. In one entry on the "Shakespeare on the Road" blog that tracks their odyssey across North America, Paul Prescott noted that he had never seen anything quite like it. In addition to their presentation of the plaque, the visitors caught dress rehearsals of the 2014 summer class performing The Merry Wives of Windsor and Troilus and Cressida; conducted a number of interviews with those involved with the program, including "Doc" Ayres, who now works with middle school and high school students at Winedale through his Camp Shakespeare program; UT English professor James Loehlin, who's been running the program since 2000; SaW Outreach Director Clayton Stromberger; Program Coordinator Liz Fisher; and both present and past students. Their posts about the program are quite perceptive and moving, particularly the "villanelle" composed by Paul Edmondson in which he writes, "That barn became our Globe, where truth could be." Its closing lines – "A summer saying 'yes" and feeling free/We sang our songs beneath the greenwood tree" – capture the spirit of Winedale about as beautifully as any I know. 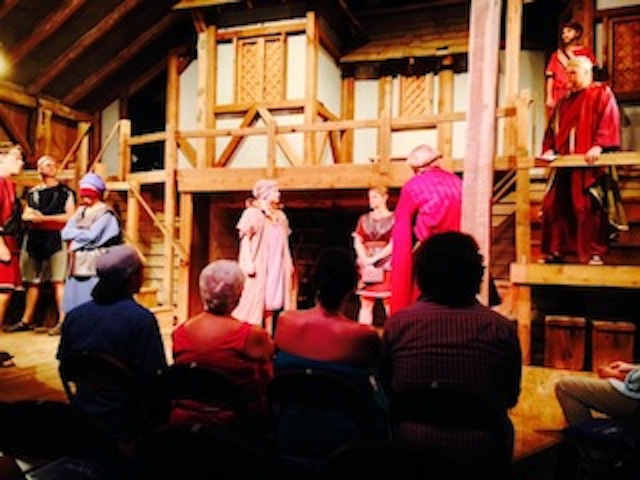 Ayres and Loehlin also received notice this summer that they will be the recipients of the the 2014 Burbage Award, presented annually by the American Shakespeare Center in Staunton, Va., to "honor a person whose work behind the scenes has advanced the enjoyment of the works of William Shakespeare for the delight and instruction of the world." In an email to Ayres, Director Ralph Alan Cohen stated that "Shakespeare at Winedale has become a treasure whose benefits reach well beyond Texas, and it is an honor for us at the American Shakespeare Center to recognize both its founder and the man who has so successfully taken up his mission." The award will be presented on Sept. 27, but prior to that, Loehlin will take the 2014 class to Staunton to perform Troilus and Cressida in the Center's Blackfriars Theater, a re-creation of the indoor stage where Shakespeare presented many of his plays. Brooks Naylor's Falstaff is not having a very good day in The Merry Wives of Windsor. (Photo by Robert Faires)

The trip is part of an annual tour that the class makes following the conclusion of the summer season at Winedale. In addition to the trip to the American Shakespeare Center, the class performs one play in Dallas (that was The Taming of the Shrew this year, presented at the McKinney Avenue Contemporary on Aug. 13) and one on the UT campus in Austin. And that happens tonight, Aug. 15, at 7:30pm, in the SAC Activities Center, 2211 Speedway. If you missed the trip to Winedale this summer, here's a chance to see how much fun the students with the closest the Bard ever got to penning a sitcom. Lecherous Falstaff tries to woo two housewives at the same time, unaware that they're wise to his scheme, and, as they say, hijinks ensue. Tickets are $15 for general admission or $10 for student/UT ID holders and may be ordered online through the Shakespeare at Winedale website or by calling 512/471-4726. 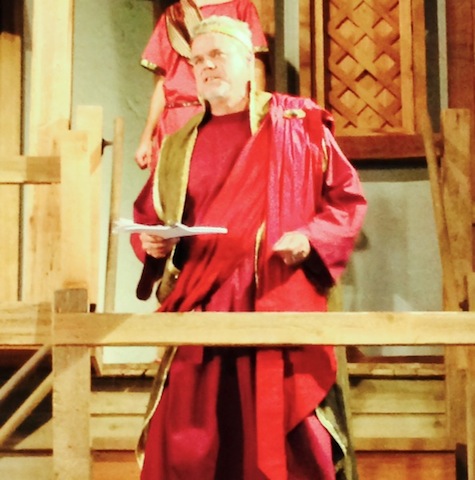 Shakespeare at Winedale Director James Loehlin as Agamemnon in the 2014 summer clas' performance of Troilus and Cressida on July 20. Loehlin had to step into the role at the 11th hour when the student who played the part fell ill. (Photo by Robert Faires)
Of course, seeing a Shakespeare at Winedale performance in a theatre in a city lacks the magic that comes from the natural setting and delightfully rough-hewn character of a performance in the Theatre Barn. But visitors to Winedale have found the site somewhat less appealing than it used to be, much to their distress. Several of the handsome wooden signs that direct visitors to the center have begun to rot and either fallen or been taken down. The gardens and grounds are tended only sporadically. Fences are collapsing. And worst of all, the historic homes that form the basis of the center, so carefully restored in the Sixties, are falling into disrepair, with chipping paint and roofs beginning to weaken. It's there for anyone to see and has been the subject of much discussion among longtime friends of the Shakespeare program and area residents, but the the conditions at the center were communicated to a much wider audience when the Houston Chronicle ran a lengthy feature story on the matter in early July. "Some worry Winedale historic center succumbing to neglect" ran the headline, which was followed by 1,550 words in which reporter Benjamin Wermund detailed the history of the property and Miss Ima's vision for it; UT's stewardship of the property, including its transfer into the Briscoe Center for American History; the declining support for the center, which has made it more difficult to keep the aging buildings in good condition; and the response from the center's fans and friends. Briscoe Center Director Don Carleton lays out the difficulty of maintaining the property with current resources – the budget for the center was slashed by 20 percent during the heavy UT budget battles of recent years – but the article raises questions about how much interest the Briscoe Center has in finding new sources of revenue for Winedale. The Houston Chronicle followed the story with an editorial calling for UT to do more to support Winedale or turn it over to another entity – the Texas Historical Commission or Institute of Texan Cultures, perhaps – who will, and that piece was reprinted in the Austin American-Statesman. At the very least, the feature and editorial has roused some of the center's many friends to come together and discuss new ways they might support the center and Miss Ima's vision. As plans develop, we'll share them here.