What the Hell Is that Tentacle Fence on Koenig Lane? 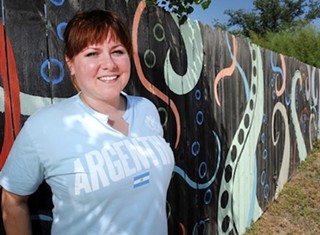 Cash for your neighborhood fence (Photo by John Anderson)

I mean, just look at the thing.

There, along the part of East Koenig Lane that runs between Link Avenue and Avenue F: giant tentacles of all colors and sizes, caught in twisted mid-writhe on a tall wooden fence stretching from one end of the block and halfway to the other. And the whole glorious parade of wriggly pigments are terminated with an image of every Pastafarian's lord and savior: The Flying Spaghetti Monster.

Who painted this wild work? If you suspected that the artist behind the plethora of squiddish exuberance was, say, 1) a pastry chef, 2) a former Dallas stage painter who worked on all those cheery Barney the Dinosaur sets back in the day, and 3) a self-proclaimed raging liberal who's finally at home here in the rapidly gentrifying but still pretty fucking weird city of Austin, Texas … well, you'd probably be Sherlock Holmes, friend, because that's precisely who she is.

Took a little creative Googling and some old-school journo-type stalking to track her down, but, finally, here's Jen Cash sitting across from me on the patio of the Thunderbird Coffee on Koenig Lane. We're a mile or so away from her amazing fence, but that's what brought us to this interview. That, and the promise of a tasty beverage.

W. A. Brenner: So I'll buy you a coffee and we'll talk about your Tentacle Fence – how's that sound?

Brenner: OK, Jen – what put it in your mind to do that to a fence?

Cash: It’s outside my boyfriend’s house. And for years I was saying, “That fence is gigantic – why don’t I paint on it?” And he kept saying, “I don’t care, I don’t care.” So I had enough leftover paint from a project I was doing inside, and I just went outside and started painting on it. I’d do sections at a time – it was my weekend thing. Like, the work-week’s done, I’m just gonna go out there and paint on the fence.

Brenner: And why tentacles?

Cash: Because our little neighborhood’s being swallowed up.

Brenner: Wait, wait, that’s a statement. Oh my god, it’s deeper than it seems. [laughs] You mean, because the neighborhood’s being swallowed by, ah, the Octopus of Gentrification?

Cash: Well, yeah – and I figured I could work the Flying Spaghetti Monster in there somewhere down the line.

Brenner: So you’re a follower of the FSM?

Cash: It’s funny – so many people, while I was getting toward the end of the fence and started painting him, everybody was going by honking and yelling and cheering. “Flying Spaghetti Monster!” People were pulling over just to say, “Hey, that’s kick-ass!”

Brenner: Have you done other public artworks like this? Or, anyway, what sort of things have you done in the past – public or otherwise?

Cash: I went to school for art, in the very beginning, right out of high school. And then I figured, what was I gonna do, be a teacher? So I bailed on that and was doing scenery work in Dallas for 20 years: set carpentry, building props, painting backgrounds, that kind of thing.

Cash: For stage houses, yeah. And for a while there I was working for Barney & Friends, painting, doing all their sets.

Cash: Yeah, try working on a set next to a soundstage where they’re rehearsing “I Love You” over and over and over, little stage children running around … [laughs] But I do a bunch of my own artwork stuff, too. It’s mostly 3-D scuplture, like the tiki thing that’s strapped to the front of the house.

Brenner: So is this the first time that somebody from the media’s contacted you about the fence?

Brenner: That’s weird. I really thought I was gonna be late to the parade here.

Cash: Well, one day I was out there painting, I was about halfway down the fence, and this girl had parked her car. And she came over and said, “Are you on Twitter? Because I’m gonna mention you.” And I was like, “OK.” And she said, “I have a lot of followers.” And I was like, “OK, whatever.” And she puts it up there – and it was The Bloggess.

Cash: Next thing I know, my Twitter’s blowing up.

Brenner: Nice, nice. And that’s great, because that Tentacle Fence, that should be as famous and as visited as Daniel Johnston’s Space Frog.

Cash: The neighborhood talks about it, like when they’re giving directions: “It’s the next street after the Tentacle Fence.” So it’s in the vernacular. And not one person had anything bad to say. People would come by on purpose to say “Hey, we love it, thanks for doing it.”

Brenner: What kind of paint do you use?

Cash: That was just leftover interior house paint. And then, when I ran out of that, I’d go to Home Depot and find the oops paint – you know, where they’ve made the wrong color, and they sell it for two or three bucks? And I’d look for colors I liked and just bought it.

Brenner: Your Twitter handle is politicalpastry. So, why “political”? Are you active in politics?

Cash: I am in the right city. Surprised they didn’t run me out of Dallas.

Brenner: Where are you working as a pastry chef?

Cash: I’m a corporate pastry chef for an investment firm: in-house, outside events, whatever they want. And it’s pretty cool: I work there Monday through Friday, I’m outta there by 2:30 in the afternoon, for the most part. Some days are 16-hour days – but that’s only when they have special events and stuff. It’s great.

Brenner: And what brings you to Austin, to Texas, in the first place?

Cash: I was born in Los Angeles. And when I was 20 years old, my parents up and decided they were gonna move to some small town – just get out of California and go to some small town, right? And they did, and it was this horrible hell-hole called Midlothian, Texas, right outside of Dallas. So I helped them move, and then went back to California. And where I was living was falling apart: My car got stolen three times within, like, a week. And I knew some people in Dallas, through skateboarding and stuff – so skateboarding is actually how I ended up in Texas. And I was in Dallas for years and years and years, and I was always driving back and forth to Austin with an ex-husband whose band members were here. He was living in Dallas, so we’d always do the back-and-forth; this was in the mid-Nineties. And I always wanted to get down here. And a few years ago I had the opportunity, so I moved.

Brenner: Did you move here for the job? At the investment place?

Cash: No, I just moved here out of the blue, started working for a friend of mine, doing carpentry and stuff. Then I had a mini-midlife crisis, quit my job, and went to pastry school.

Cash: My life was too easy – I had to give my money away.

Brenner: You ever do any pastry stuff outside of your corporate job?

Cash: I do catering and stuff, sometimes – some weddings. I do some really cool stuff for my job, too – for all their parties. I did this big gingerbread-house replica of their giant building.

Brenner: I see that your house – your boyfriend’s house – is up for sale?

Cash: Yes, it is. We kinda got priced out of it with this latest tax increase here. So he’s gonna sell it, and somebody has an offer on it – contractors who’re gonna remodel the thing. I have no idea what’s gonna happen to the fence, but my friend Brian Nelson has a place out in Manor, and he said, “If they’re gonna tear that fence down, I’ll put it out in Manor.” So we might just move it.

Brenner: I wonder if there’s any way that the new owners would have to keep it there, like some City Hall declaration …

Cash: The Realtor said she was gonna ask about it being a landmark and all …

Brenner: Well, that’d be a rather fast landmark, but, still …

Cash: [laughs] Yeah, I’m waiting for it to end up on Google Streetview.

[Note: It is on Google Streetview now. But it's an early version, sans the finial FSM.]

Cash: I’ve pulled up to the house and seen, like, dads out there with their little girls, taking pictures of the fence. One time, my boyfriend called me and said I’d just missed it: There was a truckload of LARPers and their hot mamas out there, taking pictures at the Fence. I was like, “You need to get that on film!”

Brenner: [laughs] Do you have any other art projects planned on that big a scale?

Cash: Yeah, if I ever get a chance. There’s just too much blank space to not do something with.

Brenner: And could people contract you? Like, “Hey, I have this fence, would you paint it for such-and-such an amount, or whatever?”

Cash: Yeah, that would be fun.

Brenner: Aside from that fence and your pastry work, do you have any future projects that are definite?

Cash: Not really. I have a sketchbook full of things that need to happen. But, ah, space and time …

Brenner: Yeah, I hear that. And you’ve been in Austin for how long?

Brenner: So you're originally from L.A., you slogged away in Dallas for years, and now you're here. And what’s it been like, being a creative person in this city?

Cash: It’s pretty cool: Not one person’s stopped me from doing anything. You know? People kind of just let you go.