Shane and Sara Scribner: 'A Place Beyond'

Here’s an exhibition that you’ll really like to see in person, because the figurative work – in oils on panel – is the sort of excellence that makes people shake their head in wonder: How do these artists do it? How do they take a bunch of wet pigments and render images of near-photographic precision? 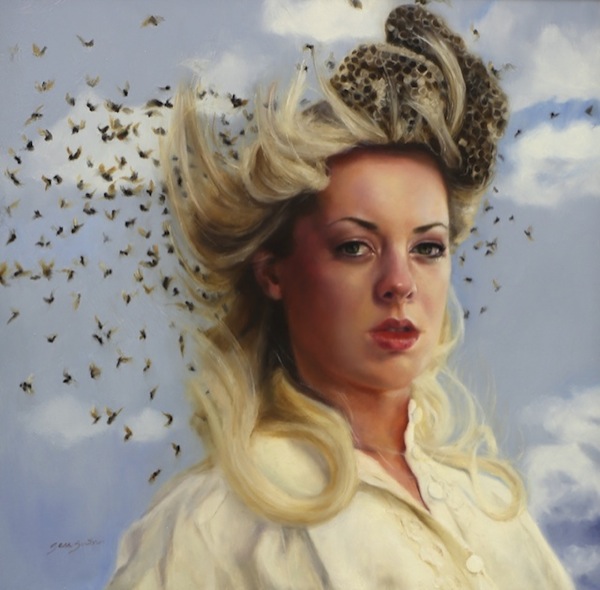 "Soaring Among Their Delicate Wings," by Sara Scribner

But note: This is no display of hyper-realism for its own sake. These vivid portraits of young women by the husband-and-wife team of Shane and Sara Scribner are on the borderland of fantasy, occupying some liminal state between the real and the imagined. The images in “A Place Beyond” suggest illustrations of scenes from (in the case of Sara’s object-and-animal-embellished portraits), or envisionings of psychological states from (in the case of Shane’s stylish mirrorings and submersions of his subjects), the subtle yet creepy tales of Shirley Jackson, Angela Carter, Helen Oyeyemi. 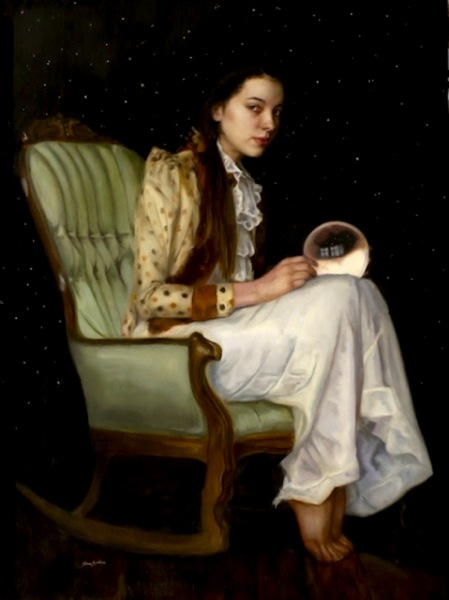 "She Navigates the Black Night Illuminated by a Sea of Stars," by Sara Scribner

Bonus: Three of Sara Scribner’s portraits are ensconced within dark wooden frames as finely wrought and unique as the paintings themselves, lending a sculptural effect to the works. As to the literary suggestions above, one of the unframed pieces – She Navigates the Black Night Illuminated by a Sea of Stars – looks like it could be a portrait of Mary Katherine Blackwood from Jackson’s We Have Always Lived in the Castle. It is to swoon in the thrall of some seductive witchery. 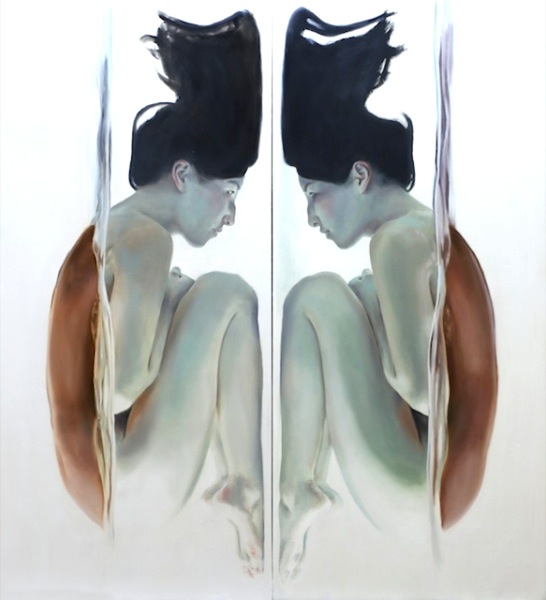 Shane Scribner’s trope of depicting women partially or completely submerged in water, especially when the resultant portrait is partially or completely mirrored by its twin, is handled with as much subtlety and balance as it is painting skill, imbuing each of the artist’s realistic images with an aspect that’s powerfully dreamlike – and, as if fortified with a spell of commerce, spurs acquisition. It’s like, especially when considering Shane’s exquisite Reflective, we’re sorely tempted to hock our signed first editions of Angela Carter’s oeuvre in order to make a purchase here.

It's possible that some pictures are worth several hundred thousand words.

So, you get the drift here? The drift of diaphanous clouds in a strange breeze among the shadows? Wally Workman’s got a habit of bringing new artists to this city’s attention, and this first Austin show for the Scribners is another lovely and compelling case in point.

Shane and Sara Scribner: "A Place Beyond" is on view through Aug. 2 at Wally Workman Gallery, 1202 W. Sixth. For more information, cal 512/472-7428 or visit www.wallyworkmangallery.com. 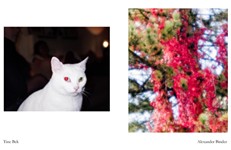