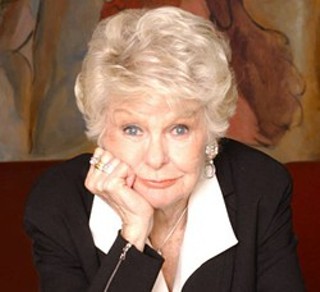 During her seven decades as a "Broadway Baby" – accent on the "broad" – Elaine Stritch seemed unstoppable, a feisty, fiery force of nature who kept blazing onstage no matter what time, the times, or The Times had to say about it. "I'm still here," she'd sing, and you felt she would be always. Alas, she's no longer here. Stritchy has passed.

On Thursday, July 17, this legend of the stage, who also made her mark on television and film, died in her home in Michigan, the state where she was born and reared, and to which she retired last year after some 70 years away, all but a decade of it living in New York. She was 89.

The highlights of her career were noted in the introduction to an interview with the Chronicle from 2008, conducted prior to her performance of her award-winning one-woman show, Elaine Stritch at Liberty, for Austin Cabaret Theatre: "Fifty-plus years on the boards that included understudying Ethel Merman in Call Me Madam and taking over her part on the national tour, starring in Noël Coward's Sail Away (written for her), replacing her former acting teacher Uta Hagen on Broadway in Who's Afraid of Virginia Woolf?, and creating the definitive characterization of Joanne in George Furth and Stephen Sondheim's Company. And that's just in the States. During a decade in London (the time when she was married to the late John Bay), she starred in West End productions of Neil Simon's The Gingerbread Lady and Tennessee Williams' Small Craft Warnings and put in four seasons on the Brit-com Two's Company with Sir Donald Sinden. And though she seemingly hit a valedictory peak with her one-woman show, Elaine Stritch at Liberty, which earned her a Tony Award and an Emmy (for the D.A. Pennebaker-Chris Hegedus documentary film about the show), seven years after its initial run, she's still wildly busy: hectoring Alec Baldwin as his mom on 30 Rock (which won her one Emmy already), squatting in an ash can in a production of Samuel Beckett's Endgame at the Brooklyn Academy of Music, spoofing herself on The Big Gay Sketch Show, and continuing to perform Elaine Stritch at Liberty at the Cafe Carlyle (in the New York hotel where she lives), in London, and, as of this week, in Austin."

The interview was one of the most memorable I've ever done, conducted as it was after midnight – per Ms. Strich's instructions – with me in the dark and empty Chronicle offices alone, with Stritchy in my ear for almost an hour. I could have listened to that husky, whiskey-soaked alto forever.

In memory of Elaine Stritch's passing, we offer the links to that interview, presented in two parts, here and here.

I'll be raising a glass to Ms. Stritch tonight in thanks for all her work. The gesture echoes that of her hard-drinking Joanne in Company, and may I say in the words of that Sondheim classic, "Everybody rise." 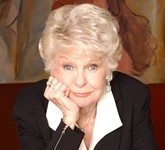 Elaine Everlasting
There's no stopping the indefatigable Ms. Stritch, and why would you want to?