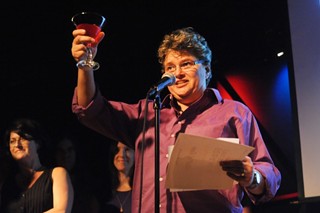 The phrase became so common as arts writer after arts writer tried to explain how deserving all the nominees were before naming the winner in that category's Austin Critics Table award that it became the drinking game for the night: Whenever you hear a critic say, "It was a difficult choice, but...," take a drink.

Of course, the loose and jokey nature of the Austin Critics Table Awards ceremony has been a part of the proceedings from the start 22 years ago, as has the festive imbibing of adult beverages. Indeed, that happy tippling that takes place with this informal affiliation of arts writers is so deeply ingrained in its traditions that it was officially incorporated into the new Austin Critics Table logo: the word "Austin" in script atop "Critics Table" in a sans serif font, all caps, atop the word "Awards" in the same font, but with the middle "A" upside-down and a green olive on a pick resting in it just above the crossbar. (Thanks, WyattBrand!)

Between all the explanations and the toasting, though – not to mention some fine musical commentary by designated Paul Shaffer of the evening Justin Sherburn on the piano – the critics managed to hand out awards in 42 categories. Receiving the big love from the Table this year were Kathy Dunn Hamrick Dance Company's The Undoing of Nonet and the Zach Theatre production of Sarah Ruhl’s In the Next Room, or The Vibrator Play, taking home four awards apiece. That was followed by Trouble Puppet Theatre's The Crapstall Street Boys, which earned three awards in the Design category. Another 10 theatre and dance productions were honored with a pair of awards each.

For the first time ever, the inductees into the Austin Arts Hall of Fame were all arts collectives. Bringing this esteemed body to 110 honorees were: Big Medium, Blue Genie Art Industries, and the Rude Mechanicals.

Jeff Mills, Three, or The Sound of the Great Existential Nothingness

Three, or The Sound of the Great Existential Nothingness, Timothy Braun

Reich: Music for Pieces of Wood/Soper: In the Reign of Harad IV/Xenakis: Okho, line upon line percussion

Kathryn Findlen, That the Night Come

Artist of the Year (tie)

Dancing Through the Pain Award

Ellen Bartel, I Begin Where I Grieve

Butler School of Music, hosting of the 2014 Menuhin Competition