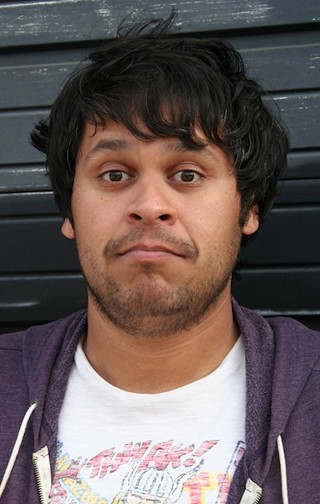 And Tellez should know, because he's been wrangling stand-up comics at this monthly New Movement gig for two years now.

And here it comes again – tonight, Mother's Day Night – and it's not even at The New Movement: The second anniversary Shit's Golden comedy showcase is going down at Spider House Ballroom, featuring the talents of Cody Hustak, Zac Brooks, Lucas Molandes, Ryan Cownie, Katie Pengra, Joe Hafkey, and more.

Why?, is a question we needed to ask of Tellez, though.

Not just Why tonight?, but why' did this Dallas native get into comedy in the first place?

Tellez: "Everyone around me has just always been pretty funny. My family has a great sense of humor and my friends growing up have always been funny, so just the company I've always surrounded myself with kind of angled me that way – but I also just watched a lot of TV growing up, and only watched comedy stuff. I also can't hold a serious conversation for more than five minutes without getting bored – which is probably pretty fucking bad and annoying to some."

And we're not suggesting that this Shit's Golden series is necessarily the best thing about comedy in this city – although, yeah, it'll certainly get you your money's worth of laughs and warped insights – but we asked the man – like, we asked him for contrast – Chris, what's the worst thing about the comedy scene in Austin?

Tellez: "Man, honestly? It's that there is almost too much fun shit to do out here … Too many festivals and easy access to pot I think is the worst thing about it in a way. I live in heaven. And it's hell from a productivity standpoint."

Still, though, here's Tellez producing a good way to cap your weekend with a fine slate of comedy at Spider House Ballroom tonight. Our recommendation? Maybe don't bring Mom, but definitely check this golden shit out.