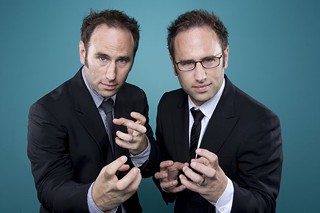 Everyone waiting inside the Stateside Theatre on Saturday night seemed to be talking about one thing – they couldn't wait to see the Sklar Brothers – again. Many had seen them earlier in the week at Speakeasy, or at the Pongrock Smack Down earlier in the day, or had heard their podcast, Sklarbro Country, and they were back for Sklartacular.

We soon understood the anticipation. Simply put, the set was crying-in-your-hanky, hysterically funny. Without inferring a Jackie Mason-schtick school of funny, but still at times echoing the man, the brothers echoed each other, hyped each other, chimed in loudly with each other, and kept an hour rolling with a steady harmony of straightforward good material. It would be easy to claim that anyone with a double has an advantage in stand-up. It was Sklar-squared – they're at once like seeing double while impaired, and also like seeing one person. They don't dress alike; they riff minimally on "being twins." Instead, they invoke a first-class flight with Laura Dern and Richard Simmons that just wasn't right and involves the sexual harassment of Randy, and that's really all that you, gentle reader, should hear about that from us. Just trust us that some form of the Doublemint tagline, "double the flavor," or some kind of "double the talent, double the footprint" explanation for the Sklars' appeal would be reductive. Solid gold writing speaks for itself, and it was all there. Add talent to smart schtick, and the result is a winner for the Sklar Brothers. We can't wait to see them again, and we know their mother is very proud.

The strange logic of Damien Lemon preceded the Sklars. It is a logic that understands that Yelp is "the GPS of eating." The only thing about Austin that makes him uncomfortable is that "you can't be nocturnal and get up in time for premium barbecue." This statement drew loud groans of approval from other night-lovers, as nothing truer may have been said about living in our fair city. In fact, barbecue seemed to be a running theme in every set this week. We were asked at one point about when, after three days of eating barbecue, one should expect the gastrointestinal result, which invited more loud groans, this time in sympathy.

The duties of host fell to Comedy Central writer Kurt Metzger, who had us at, "Just want to let you know, I suck." He went on to do anything but, as he described life in Brooklyn. "Eye contact is bullying in Brooklyn." His onstage real estate was broad, as well, as he roamed the stage, always returning to lean into the audience with a cold shot to the face with the proverbial rubber chicken. 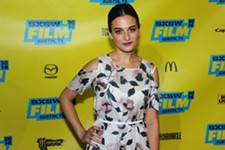