Mike Birbiglia's successful longform pieces Sleepwalk With Me and My Girlfriend's Boyfriend showcased the gifted standup and NPR darling's storytelling skills, as well as his knack for merging his wide-eyed-everyman stage presence with darker autobiographical content.

The master monologist's current show, Thank God for Jokes, is also largely autobiographical, yet within an episodic format that harkens back to his roots as a more traditional joke teller.

Amiably stringing together a leisurely series of anecdotes embodying varying degrees of personal embarrassment and emotional discomfort, the show is a gently cathartic meditation on the power of jokes, and their role in the lives of Birbiglia and his audience.

But the thematic elements and gentle personal revelations never came at the cost of the laughs, which flowed copiously through stories encompassing the comic's Catholic-school experiences, the distinctions between on-time people and the habitually late, his attempt to scratch an itch while handcuffed in the back of a police car, his ill-advised public encounters with filmmaker David O. Russell and actor James Van Der Beek, and the mortifying experience of accidentally uttering the f-word while performing with the Muppets. The talk grew particularly winsome when Birbiglia recounted interactions with his wife, who often serves as an unseen voice of reason (although not when she's blowing off a yoga class after her spouse makes a big deal of saving a mat for her).

The fact that the show's far-ranging vignettes achieved the same momentum and cohesion that he brings to his longer pieces is a testament to Birbiglia's seamless craftsmanship. And the fact that he returned to the stage to deliver an encore reprise of the horrifying yet inescapably hilarious hotel incident that's a centerpiece of Sleepwalk with Me underlines his instincts as a savvy entertainer. 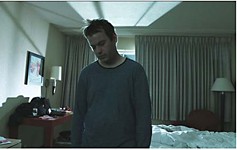