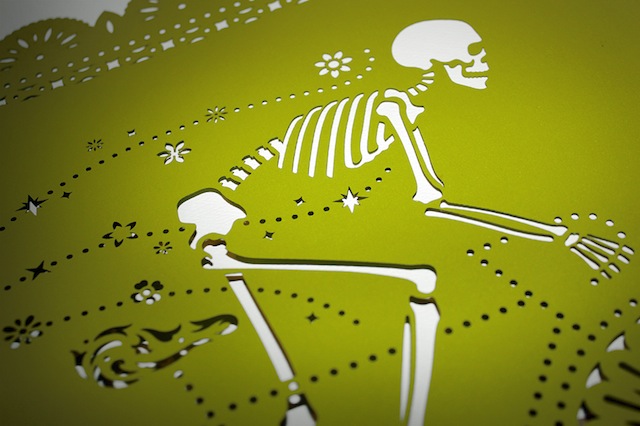 Take your standard diamond frame bicycle, be it fixie, BMX, or full-gear. Two pedals, a chain, one handlebar, the seat. Only thing you can switch up is the sizes. Right? Wrong! According to Charles Youel, there exist a million different ways to scheme up a signature cycle – at least in the form of screen printings as poster art. For the past eight years, the Minnesota native has organized ArtCrank, exhibitions showcasing bike-inspired poster art, in 15 cities around Europe and the U.S. Through the work of local artists, he’s presented more than 1,500 posters to upwards of 50,000 enthusiasts.

Never in his life has he seen two that look alike.

“There’s a special relationship that creative people and visual creatives have with bicycles,” says Youel, in town Friday for the third annual Austin ArtCrank, which expects to draw 2,000 at Fair Market. “The aesthetics and the form are a big part of it, but also just the very act of riding a bike is, in so many ways, a creative act of expression. Even if you take the same set of streets from your house to the place you work every day, your experience with that will be different based on what you encounter and what you see.

“You’re more immediately involved in the world around you when you’re on a bike. I think that spurs ideas for a lot of people.”

ArtCrank never carries a specific theme, but its shows naturally shed light on specific subcultures or physical institutions within their host cities. “It could be a skyline, a local landmark, or a geographical feature,” says Youel. “Something that’s going to be familiar to those who ride in that community. For Austin, this ‘Keep Austin Weird’ aesthetic people really seem to believe in and want to channel into their work.”

It’s for that reason that Austin’s prints, all of which will sell for $50 a piece, tend to toast tacos and food trucks, Dia de los Muertes emblazoned facings and other assorted Chicano and Texicali ideas. “In a lot of cases, there’s no mistaking them,” Youel adds. “They couldn’t have come from anywhere else.”

“We’ve seen a sneak preview of the image,” Youel confides. “It’s going to blow people away.”