Whatever his politics, the man's still a comedy treasure

And now for something a little different from the front line of this week’s Moontower Festival. Dennis Miller, the SNL alum and snarky “Weekend Update” anchor whom the smarting left still lambasts as a turncoat-turned-Fox-News-gasbag, performed at the Paramount Theatre last night to a room of thoroughly satisfied idolaters.

Some went looking for a slice of nostalgia. Others, perhaps, to affirm the tenets of their own intractable conservatism. It was a hell of a show either way, because, contrary to popular opinion, a preternatural gift for humor can’t be wiped out by an adopted conservative posture.

Miller, now 60 and currently something of a Sideshow Mel to Bill O’ Reilly’s Krusty the Clown on The Factor, was, of course, a one-man cannonade of similes, arcane metaphors, and how-the-fuck-does-he-pull-that-off swagger. No matter what you may think of his political metamorphosis since the 9/11 attacks, his greatness and larger-than-life persona as a stand-up comic and industry demigod are impervious to grudge-holding partisan fuckery. Ever the quick-quipping wisenheimer, Miller popped off acrobatic one-liners and cutting takedowns of political foes and allies alike with the deftness and precision of a – well, cue Mr. Miller himself to install the punch line here.

Whether it was his characterization of former Clinton administration aide James Carville as looking “like a muppet accidentally washed on hot” or the regional catnip thrown our way in the form of praise for the Spurs as a team that “hits more threes than Bill Clinton in a room without fours,” Dennis Miller still has his shit together as a comedian. “I didn’t know what to make of him,” Miller confided about Pope Benedict. “Usually I see a German guy, a balcony, and an adoring throng and I’m not happy.” The leftist blogosphere tends to have selective amnesia for the days when Miller kick-started “Weekend Update” in the Eighties with his smirking demeanor, shimmying coif, and self-satisfied giggle. Their epitaph for the bearded bard of barbs ignores what he’s meant to the comedy world for the last 30 years, and is almost entirely predicated on its tunnel vision for his 21st century political waltz to the right. (As denoted by Miller’s support for George W. Bush, the war in Iraq, and his now decade-long affiliation with the neocon brigade over at Fox News.)

For those of us too young to have savored Miller on SNL, the memory of his weekly alternative talk show on HBO burns brightly in our evanescent memory banks. “Now I don’t wanna get off on a rant here, but …,” he would intone as the set faded to a pitch-HBO-after-dark-black before he would barrel ahead anyway to suss out the inherent bullshit of that week’s hot-button issue or personal pet peeve.

“Of course, that’s just my opinion, I could be wrong,” he’d conclude with ambiguous and incalculably faux-sincerity. Today, one opinion of his that stands out is a staunch skepticism of global warming, which he addressed to only sprinkles of support from the Paramount crowd. If you read up on Miller for even a half-hour, you’ll find testimony from friends, coworkers, and even the man himself that he was never as liberal back then as he seemed. Conversely, he’s not nearly as conservative today as he appears. In actuality, Miller is a self-described libertarian: a fiscally conservative, hawkish, yet socially liberal cynic who describes himself as an “objectivist.” If we’re all being objective, we’d readily admit that Dennis Miller is a comedy treasure. Who else can make a room howl at a reference that’s way over our heads? 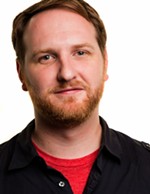 Lights Come on for Third Moontower
Aziz Ansari, Kids in the Hall lead the pack of 2014 jokers