Good: his set; Bad: when it ended; Interesting: the time

In his jokes and general demeanor, MacDougall, who hails from Canada and previously wrote for Martin’s Comedy Central series, Important Things with Demetri Martin, shares much with Martin – enough that fans of Martin’s comedic style will likely appreciate MacDougall’s as well. For example, early in his set, MacDougall offered this insight into human nature: “Filipino people make a lot of mistakes. Because they’re human.” Unlike Martin, however, MacDougall also delivered lots of longer comedic narratives with several punch lines woven throughout. This provided a nice foil for Martin’s performance after.

Martin kicked off his set reminiscing about Person, the comedy special he filmed at the Paramount in 2007, and joking about the timing of his Moontower performance this year. “Wednesday night!” said Martin, who then imagined the festival’s discussion regarding his show…

“Can we do Demetri at 4pm in the afternoon?”

Martin then won over the audience in the usual manner: asking where people are from. He’d name a city, and then people would cheer. But the gimmick proved more than just a way to wake up the audience between sets. It segued into his first bit. “I love that people can answer questions in an audience with ‘Woo!’,” he said. “I wish you could do that in real life. Like, you’re on a date, and the person says, ‘I’m from D.C.,’ and you go ‘Woo!’” Lots of short, punchy one-liners then cascaded. He talked about a few of his least favorite street signs, like the “Prepare to Stop” sign: “It just seems like it’s for overly sensitive people.” And he discussed the complicated relationship we have with our cats. “There is a fine line between pet and hostage of another species,” he said. And, of course, he touched on a few of the differences between men and women. “When a woman bites her lip, I think that’s pretty sexy,” said Martin. “When a man bites his lip, I think he’s about to fart.”

That cadence carried through most of the show, save for a quick break for some crowd work. When Martin asked the audience what they might want to talk about, they answered, in this order: cage fighting, powdered alcohol, and what happened to Martin’s show on Comedy Central. “Okay, these are getting increasing hurtful,” Martin joked, but he did answer: “I quit the show. As they were canceling it.”

Although the performance never veered too far from Martin’s well-known, slightly nerdy style, it did have some edgier moments. For example, the audience seemed particularly torn on Martin’s observation that Jesus may very well have been the world’s first scarecrow.

Martin’s encore punctuated the show nicely. It featured “Good, Bad, Interesting” jokes – a style of joke used on Important Things. Here’s how it works: on an over-sized notepad, Martin reveals, one at a time, good, bad, and interesting scenarios or uses for things or sayings, like these two favorites from last night:

Stop, drop, and roll Good: In case of fire Bad: At the top of the stairs Interesting: Way to get out of a boring conversation

These quick, playful jokes (with their simplicity and underlying sweetness) encapsulated the tone of the whole show. They highlighted Martin’s unique stage presence, which, despite his understated style, resonated even in last night’s large theatre. Plus they killed, which made for a pretty stylish exit.

Read more on Martin’s past work and what he’s working on now in this interview from last week’s issue. 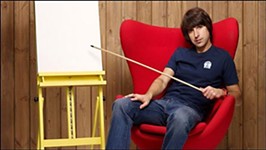