Comic Kat Ramzinski mugged, jokes about it at Moontower 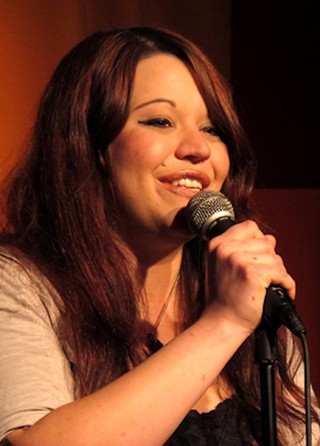 The most trying week of Kat Ramzinski’s life began Sunday night, shortly after 9:30pm, when the local comedian stepped out of her Northeast Austin home to walk to the H-E-B on the corner of 183 and Manor Road so that she could buy some ibuprofen for a toothache.

The toothache was a rough one – an exposed nerve that would require surgery Monday morning – and on Sunday, the pain had gotten so bad that it began inducing migraines severe enough to prohibit her from driving to San Antonio so that she could celebrate Easter with her parents. Instead, she spent the day in bed. That evening, shortly before welcoming a friend so the two could watch Game of Thrones together on tape-delay, Ramzinski, 29, walked through the adjacent Winn Elementary School play fields to discover H-E-B had closed for the holiday.

Dejected, she started back toward her house. A few steps later, she found trouble on her tail.

Walking down the sidewalk, Ramzinski noticed a light silver minivan pass by her to her left at a speed she deemed “kind of slow for the neighborhood.” She saw the minivan’s brake lights flip on, then she saw the minivan slow down a little more. It stopped completely, then turned into the entrance of the elementary school and shut off its rumbling engine.

Ramzinski reached into her purse, which she’d hung over her shoulder underneath a zip-up hoodie, and fished around for her mace. She saw a woman step out of the minivan, then three men open their doors and step out right behind her. The men stayed back near the van, but the woman walked toward her.

“She was very frazzled,” Ramzinski told the Chronicle. “She looked, in the face, like she was kind of upset – maybe angry, maybe on drugs. But none of them looked like they were up to any good.”

The woman continued toward Ramzinski, leaned her face into her, then walked a circle around the comedian. She raised one hand like she was going to punch Ramzinski, but with her other hand began to grab onto Ramzinski’s bra strap, pulling at her collar in an effort to rip her hoodie off her person.

Ramzinski remembers scratchings, bitings, hair pulls, and body punches. The woman pulled her toward the van, but Ramzinski dragged her attacker out into the street, where they wrestled for half a minute. Then Ramzinski looked up and saw the black blade of a knife aimed at her.

She pulled the woman back onto the sidewalk and lifted her hand to shield her body, figuring she’d rather get stabbed in the hand than across her face. “At first, I thought she had just cut my two fingers, but she got me really good.”

Blood spewed “everywhere” from the middle and ring fingers of her right hand. Ramzinski felt another tug upon her purse, this time from one of the three men. He yanked it off her shoulder, and she looked to her left to find it. "Right then," she says, "a huge fist just popped me in the face and knocked my glasses and my eye.

“It was the worst feeling, getting punched. My whole brain rattled, and everything turned black.”

A cult-like fan of crime dramas and shows you’ll find on the ID Network, Ramzinski tried to employ a few learned tactics. She scratched at her assaulters’ faces, tried pulling hair out, and rubbed blood on the woman. She whooped and hollered, and tried to yell for help. Finally, a light came on in a nearby house and a couple and their young daughter walked out. The attackers ran off, and the couple took Ramzinski inside.

Ramzinski stayed with the couple while the husband alerted authorities and called the comedian’s parents. She bled all over the carpet, but they didn’t seem to care. “They deserve all the credit for helping me,” she said. When they got her to St. David’s Hospital, her friend and local comedian Michael Priest was there to greet her.

Ramzinski had been brought to St. David’s for the purpose of stitching up her hand wounds, and the doctor presiding over her treatment was a familiar face as well. He’d treated her for a spider bite a few years prior – an incident that’s worked its way into her A-list of material. Shortly after midnight, he stitched her two fingers then informed her that he’d tapped St. David’s charity to cover her medical costs.

Around 1am, Ramzinski was transferred to University Medical Center Brackenridge, where she was seen by an eye doctor. The swelling was too severe to treat anything, but she knew she’d fractured a few ocular bones. She was discharged from treatment Monday afternoon and went back to Priest’s house to rest.

Aside from the obvious issues stemming from potential nerve damage to her fingers and two fractures to the bones that house her left eyeball, Ramzinski had other concerns she was forced to deal with Monday. This week, as all who follow comedy in Austin know, is the week of the Moontower Comedy & Oddity Festival, a gathering that comedians around the city have deemed more important than SXSW. And Ramzinski, who performed at the first Moontower in 2012, was scheduled to take the stage at the Parish Underground on Wednesday night, just 72 hours after she’d stood on a sidewalk and seen her life hang in the balance. Whoever assaulted her Sunday may have made off with $30 and an outdated ID card, but they wouldn’t take her Moontower show.

Soon, the recovery process would take hold. Comedians organized a benefit for Ramzinski at Spider House on Monday. Moontower’s Lisa Mejia sent a band member from Black Joe Lewis to Priest’s house with groceries. Altercation Punk Comedy’s JT Habersaat set up a GiveForward campaign with the hopes of raising $1,000 for his buddy. Since Monday, it’s racked up an excess of $3,700. Ramzinski's mother came up from San Antonio and brought flowers that they’d eventually take to the couple that helped her daughter on Sunday, along with a teddy bear for the couple's daughter, who shouldn’t have had to have seen that.

At 4:30pm on Wednesday, the comedian laid her head down for a three-hour preshow slumber. Six hours later, packed into an at-capacity room on Sixth Street, Ramzinski opened with a joke about her current mental capacity before explaining that she’d been “stabbed in the hand by a bunch of bitches.

“It was three guys and a girl. They did not cast the pizza place,” she said. Her eye looked terrible. Her smile did not.

Ramzinski held the stage for 10 minutes, during which she managed to finagle more than six minutes of original, mugging-centric material – no small feat for a woman who’s spent the past three nights so shaken that she hasn’t been able to fall asleep. She spoke of the attention showered on her following the assault, the assimilation to gang culture she obtained growing up in San Antonio, and the ways in which a glaring black eye may or may not affect her love life.

“Bad news for my hand-job career,” she admitted, adding later that she’s spent the past few days busy “trying to get some of that black-eye dick.”

Her most poignant moment came just moments before the end, when she revealed that investigators had asked that she stay mum on the incident, lest it mess with their inquiry and thus screw up the whole case.

”I’m a comic,” she informed them. “I’m telling everybody.”

Today, Ramzinski heads to a sketch artist’s office to provide descriptions of her attackers for composites. She went in for an eye consultation Wednesday and learned that she’ll need two metal plates installed into her socket – one to reform her brow and another on the bottom to keep her “wonky” eye in place.

“Worst case scenario, it’s a little droopy,” she says, adding that, by now, that exposed nerve protruding from her tooth’s nothing but a slight annoyance. “They said no one’s gone blind from it yet, but they’re required to tell you that. It’s not going to happen here. This doctor’s really hot. I trust him.” 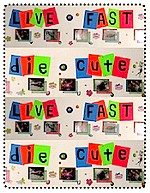 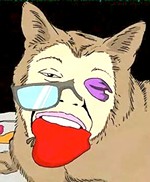 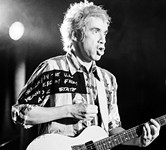