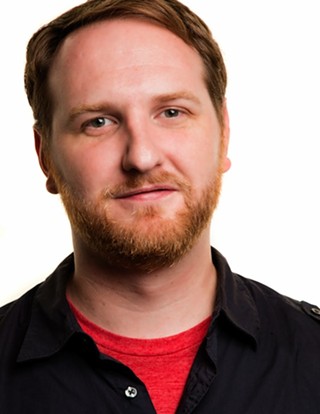 Moontower Comedy & Oddity Festival features tons of great comedians from all over. But as you pick shows, don’t forget great hometown comics, like 2013 Funniest Person in Austin and Mascot Wedding co-host, Mac Blake, and 2014 FPIA hopeful and co-host of Sure Thing, Brendan K. O’Grady.

O’Grady started performing stand-up in Austin in 2011 after stints writing for The National Lampoon and work on some low-profile TV projects. Having not done much stand-up prior to braving open mics here in town, he largely credits Kyle Kinane, Paul F. Tompkins, and, maybe most of all, Patton Oswalt with helping him make that jump.

“Part of the reason why I didn’t do stand-up for so long was that, growing up, I just thought it was all purple blazers with your sleeves rolled up standing in front of brick walls talking about airline food or whatever. I thought all comedy was Star Search,” says O’Grady. “When I heard Patton Oswalt, who would kind of fearlessly just make references to all the nerdy stuff that he was interested in and see how much of the audience, including myself, got the joke and was amused by it, it really opened me up and made me think, ‘Oh, you can write jokes any way you want to.’”

Given O’Grady’s influences, it might come as no surprise that movies, food, nerdom, and the Internet show up in his comedy a lot. And like most comics, he’s often a bit hard on himself. “I almost changed my Twitter description to 'self-hating millennial',” says O’Grady. “Like anybody, we [millennials] want to believe that we’re capable of great things, but it’s still going to be a bunch of years before we prove that. And in the meantime, during all this down time of finding ourselves, we sure are annoying. I get it older people. I apologize on behalf of all of us. I’m sorry about LOL cats. I’m sorry about all the cats on the Internet in general. That’s our bad. We promise we’ll try to make it up to you by finding a cure for cancer or something in like 30 years.”

Even if he doesn’t end up curing cancer later, O’Grady can at least take comfort that his weekly comedy show, Sure Thing, no doubt redeems a few of his generation’s missteps on 4chan. Sure Thing is a weekly stand-up show featuring comics from all over the U.S. “I co-produce and co-host with Duncan Carson, who is one of my dearest friends,” says O’Grady. “It’s a show we’ve been doing now for almost two years.”

Sure Thing has developed a solid following, and O’Grady and Carson now hope to use the show to help grow the reach of the Austin comedy scene. “It’s been successful enough that we’re forming Sure Thing as a record label, and we’re going to be putting out some releases by Austin comics – full-length, stand-up releases, as well as a compilation featuring our favorite comics,” says O’Grady. Watch their Facebook and Twitter for an official announcement. In the meantime, you can catch O’Grady tonight, April 23, at 7pm, hosting the Moontower Trifecta show at the Velv Comedy Lounge, 521 E. Sixth. The show features comedians Jackie Kashian, Dan Naturman, and Nick Thune.

If you’re looking for a familiar Austin face at a headliner show, Mac Blake opens for Dennis Miller at the Paramount on Thursday, April 24, at 7pm. In addition to frequenting O’Grady’s Sure Thing show, Blake won the 2013 Funniest Person in Austin title, and he often performs alongside Austin comedy veterans like John Erler and Owen Egerton as a member of Master Pancake. He also co-hosts two shows: Mascot Wedding with David Jara and Jazz Cigarette with Joe Hafkey. Last, but not least, he writes and performs with the sketch comedy troupe Stag.

Despite his extensive comedy résumé, this week’s opening gig at the Paramount came as a surprise. “Honestly, I found out when they posted the schedule on the website,” says Blake. “Same way as everybody else did.” This will be the second time Blake has performed at the venue and for a crowd this size. “Playing the Paramount is a delight,” says Blake. “I got to open for Bo Burnham last year, just like 10 minutes or so. But I think that was the most people I had ever played to at that point. Probably at this point, too.”

At the Paramount, Blake will perform stand-up, but his comedy sketch group, Stag, will also perform later in the week as part of the Double Barrel show at the Parish Underground. “We’ll be a doing a 25-minute set of sketches, and it should be fun,” says Blake. “Hopefully it will be our usual brand of pretty funny, kinda dirty, a little bit weird, and maybe we’ll mess with people a bit.” In all, Blake performs in four shows over the course of Moontower – par for the course for the schedule he keeps and for the breadth of his comedic interests. Check out a full list of his shows here.